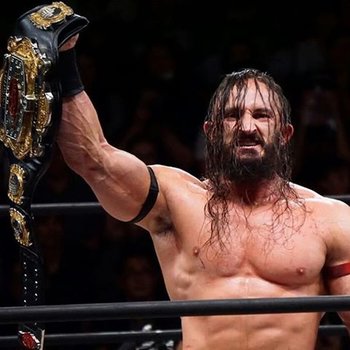 Benjamin Satterly (born 22 August 1986) is an English professional wrestler best known for his work in various promotions under the ring name PAC and for his time in WWE as Adrian Neville and later Neville. Before WWE he previously wrestled in many indie notable promotions such as Pro Wrestling Guerilla, Ring of Honor, and Dragon Gate. He signed with WWE in 2012 and worked under the promotion's developmental brand NXT up until the RAW right after WrestleMania 31 where he made his official roster debut in a Squash Match against Curtis Axel. He walked out on his WWE contract in October 2017, and after finally negotiating his release, returned to Dragon Gate in October 2018, and won the Open The Dragon Gate Championship in December of that year, joining the faction Real Extreme Diffusion. In January 2019, he signed on with AEW.

Back in his home country of Britain, PAC is one of only three FWA Flyweight Champions

as well as the first-ever 1PW Openweight Champion

. However, his most decorated title history comes with Japan's Dragon Gate, having held its Open the Dream Gate

note three times, each as part of a different trio, and Open the Twin Gate

note with Dragon Kid championships, as well as its USA territory's Open the United Gate Championship

note with Masato Yoshino. Speaking of the States, in addition to all those titles he is also a one-time PWG

in history prior to the reign of Finn Bálor, a two-time Cruiserweight Champion

and the inaugural AEW All-Atlantic Champion.