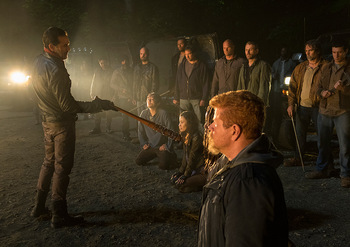 Who will meet Lucille?
Negan breaks the group and proves they now have something to fear.

Due to the Anachronic Order of the episode, this summary will be told in chronological order.

Rick can only watch in shock as Negan selects his victim - and it's none other than Abraham, who can only brace himself for the end as Sasha, Rosita, and the others recoil in horror. After one strike to the head with Lucille, Abraham spits out one final one-liner - "suck my nuts." Amused, Negan strikes again, and again, and again, until Abraham's head is no more.

Negan begins dangling Lucille in front of Rosita, demanding she take a good look at it. Enraged, Daryl jumps up and slugs Negan, and is then restrained by the Saviors. Dwight offers to kill Daryl, but Negan refuses, and announces that Daryl has incurred his wrath even further. He already gave them a freebie after Glenn's outburst, and explains he wants to make it clear he's a man of his word. He looms over Daryl with Lucille, and swings... and strikes Glenn twice. Maggie can barely look as now Glenn's face is a wreck, one of his eyeballs bulging out of his skull. Negan is incredulous that Glenn is still kicking after two big hits, but Glenn is undeterred as he strains out his last words - "Maggie, I will find you."

Negan tells the horrified group that he's sorry about this, but repeats his earlier warning - "no exceptions." Negan then swings Lucille again and again until Glenn's head is a pile of mush on the ground.

Negan jokes that Lucille is a vampire bat, and when he asks Rick if the joke was that bad, Rick simply responds that he's going to kill him some day. Annoyed, Negan retrieves Rick's axe from Simon, and drags Rick into the RV. He tells Rick that his best chance to kill him is right now, while they're alone in the RV together. Rick tries his best, but Negan once again easily subdues him and orders him to not try it again.

As dawn breaks, the RV arrives at the burning pile of lumber the Saviors had used as a roadblock. A herd of walkers has convened around the dying fire, and Negan throws the axe on top of the RV, and orders Rick to retrieve his axe. Rick eventually is forced outside, and can barely fight off the herd as he begins suffering hallucinations of the group's predicament. Negan begins gunning down some of the herd to give Rick a hand, and Rick is able to get up to the top of the RV and find the axe. He then remembers the deaths of his friends, as Negan insists that there is still a lot that can still happen.

Growing impatient, Negan fires an assault rifle into the roof of the RV, forcing Rick to run. Rick leaps onto the lynched Library walker, and hangs on for dear life as the herd awaits below. Negan pitches in again and clears a chunk of the herd, and Rick is able to get back to the RV with the axe - Negan's axe, that is.

Negan drives the RV back to the clearing, and gives Rick the axe back after cleaning it. He addresses the prisoners and insists that Rick still doesn't recognize his authority. He has Carl brought forward, and draws a line on his left arm after pinning him to the ground. Negan orders Rick to cut off Carl's left arm with the axe, or the others will be gunned down, Alexandria will be destroyed, and Rick will be spared for a few years only to stew on the destruction of everything he loves. Michonne pleads for Negan to stop, and Rick sobs that he should be the one to lose his arm, but Negan begins losing his patience. Carl resignedly asks Rick to just do it, and Rick finally picks up the axe, shaking and weeping, and prepares to do it... but Negan stops him, satisfied with the look of pure fear on Rick's face, his last bastion of defiance destroyed. Negan has Daryl wrangled into a van, and says that any future defiance will result in Rick being forced to cut pieces off of Daryl. He then declares that Alexandria has one week to gather up sufficient supplies for their first tribute, and the Saviors depart with the captured Daryl, leaving the group their RV and a truck.

Maggie is the first of the grieving group to get up, and insists that she will complete the journey to Hilltop alone, and the others must return to Alexandria to prepare to fight them. Rick asks how when the Saviors have an army, but Maggie refuses to accept defeat as she approaches the remains of her husband. Sasha agrees to go with her to Hilltop, and she, Rosita, and Eugene take Abraham's body. The others take Glenn's body.

As Rick drives the group away from the clearing, he imagines something Negan had thought of - his entire group, his entire family, enjoying an outdoors Sunday dinner together, among them Glenn and Maggie's baby, and a pregnant Sasha. Rick snaps out of it as he leaves the clearing, and notices a walker arriving at what remains of Glenn Rhee and Abraham Ford.