Recap / Tangled: The Series S1E21 "Secret of the Sundrop" 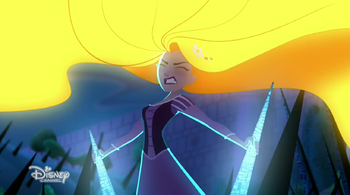 I'm ready as I'll ever be!
Something dark is coming for you!
— Varian, to the residents of Corona
Advertisement:

The fate of Corona hangs in the balance as Rapunzel embarks on a final showdown against Varian, who, still angered and hurt about the fate of his father, has now decided to do anything it takes to try to free his father—including endangering the royal family. King Frederic reveals some background on the Sundrop Flower to Rapunzel. Eugene, Cassandra, Frederic and Maximus join Rapunzel when she is forced by Varian to go to Old Corona.