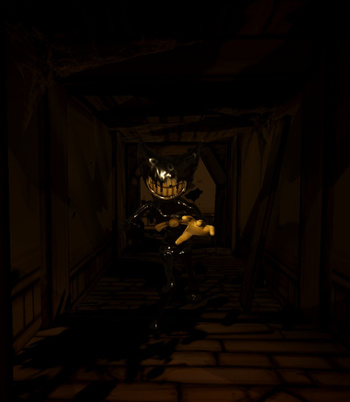 New Objective: RUN AWAY
WARNING: Spoilers Off applies to all Nightmare Fuel pages on the wiki. Unmarked spoilers ahoy!
Above all, fear the machine.
—Tagline
Advertisement:

The tagline above is not for show. In its relatively short run, Bendy and the Ink Machine has proven itself to be one of the scariest games of 2017. With a gloomy atmosphere that's rife with Paranoia Fuel, gameplay elements that change with each update, disturbing enemy designs that are guaranteed to make you lose hours of sleep, and a dark, cryptic story that increasingly sounds like something out of a Cosmic Horror Story with an ending that has to be seen to be believed, by the time you're done playing, you will learn to fear the machine...