Characters / Bendy and the Ink Machine

The character sheet for the Meatly and Kindly Beast's video game, Bendy and the Ink Machine, as well as its sequel Bendy and the Dark Revival.

Henry Stein
Click here to see him in Dark Revival

The Player Character. A former animator and friend of Joey Drew's, Henry receives a letter asking him to return to the animation studio.

Henry, come visit the old workshop. There's something I need to show you.
Click here to see him in Dark Revival

A famous animator and head of the studio where Henry used to work. He is the creator of Bendy and Boris, both in the sense that he made their cartoons, and in a much more literal sense... 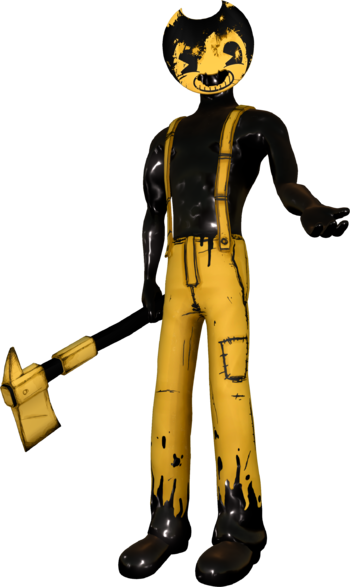 "He will set us free..."
Voiced by: Aaron Landon

Once the head of the Music Department, Sammy started acting weirdly around the same time the Ink Machine's pump function was installed in his office to get rid of the ink leaks.

A young and aspiring voice actress working for Joey Drew. Her first big role seems to be Alice Angel.

The janitor of Joey Drew Studios. He's one of the many employees who complain about the ink machine, as well as Joey and Sammy's Sanity Slippage.

"I sees everything..."
Voiced by: theMeatly

The projectionist of the studio who also runs the projector inside the orchestra room. Like Wally, he seems to be aware that Joey and Sammy have been acting very strange.

An employee who worked in the Heavenly Toys department of the studio. He questions why Mr. Drew got so angry with him for painting some of the Bendy dolls with a crooked smile, and wonders what to do with the Alice Angel dolls that aren't selling.

"I keep telling these people, if Mister Joey Drew keeps cutting corners like this, someone's sure to end up falling to their death. And it sure ain't gonna be me."
Voiced by: Mike Mood

A plumber and mechanic who worked on keeping the Ink Machine's pipes in prime condition. However, both the frustration toward said job and the machine giving him a bad feeling has him decide to not take any more jobs for Joey Drew.

A man who is presumably responsible for Joey Drew Studio's finances. He is frustrated that Joey Drew's endless stream of ideas is costing the studio too much. 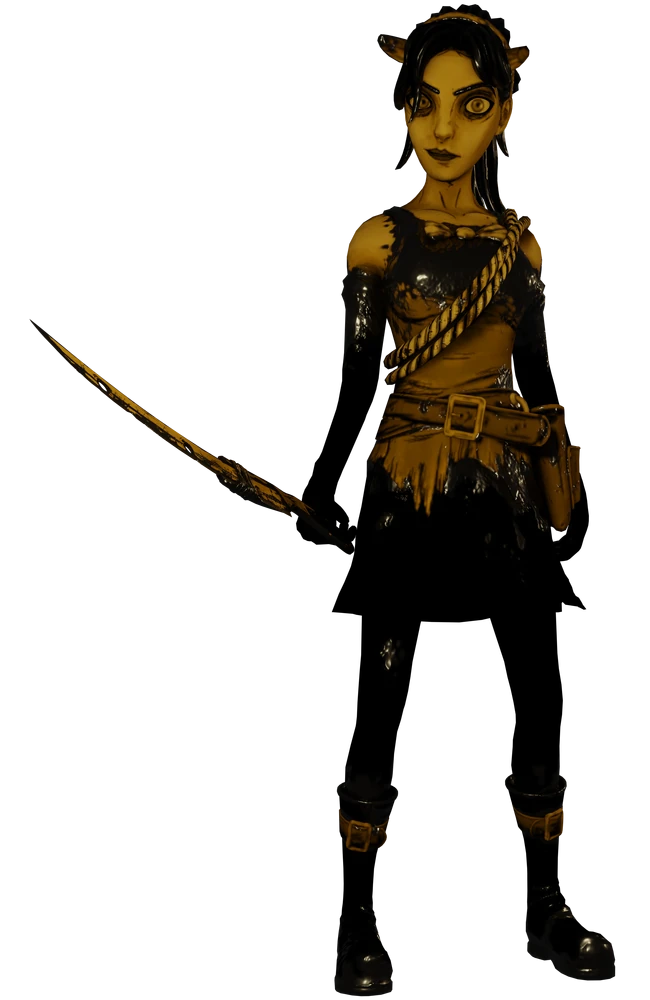 I... I honestly don't know my name... so they call me Alice. But I'm no angel.
Voiced by: Lauren Synger 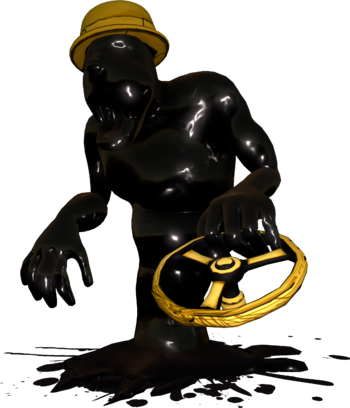 "I love the quiet, and that's hard to come by these busy times."

A lyricist who worked with Sammy Lawrence, who appears in Chapter 2 after the release of Chapter 4. He's been turned into a Searcher by the time Henry arrives.

An architect Joey Drew hired to build a Bendy-themed amusement park. It didn't turn out well.

A mechanic working for Bertrum Piedmont.

An academy dance teacher who joined Joey Drew Studios to implement her dance movements into the Bendy cartoons. 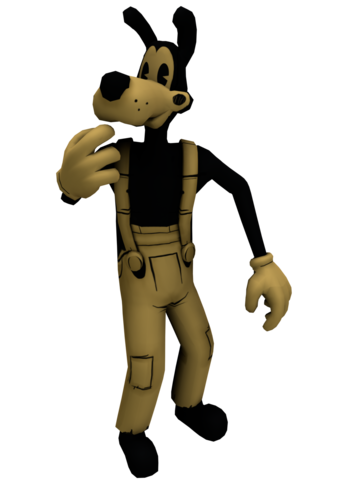 "Now I'm not really Buddy anymore. I am also Boris. Descending deeper into this world of ageing, yellowing madness."

The main protagonist of the novel Dreams Come to Life. A volunteered worker of Joey Drew Studios that slowly discovers a dark secret behind it. He's also the friendly little wolf who accompanies Henry in Chapter 3. 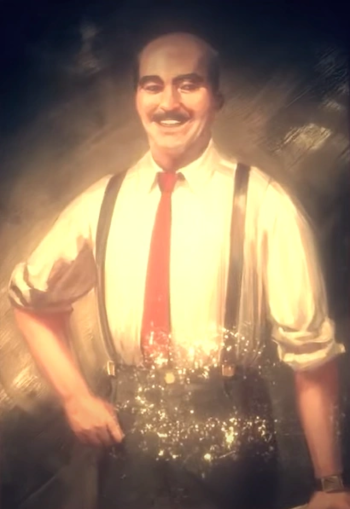 A wealthy friend of Joey Drew who bought the rights to Bendy's IP after the studio went bankrupt.

What's happening to me?!
Voiced by: Erin Lehn

The protagonist for Bendy and the Dark Revival. A famed animator at Archgate Films, she ends up getting trapped inside the Cycle after being tricked by Wilson into starting the Ink Machine. 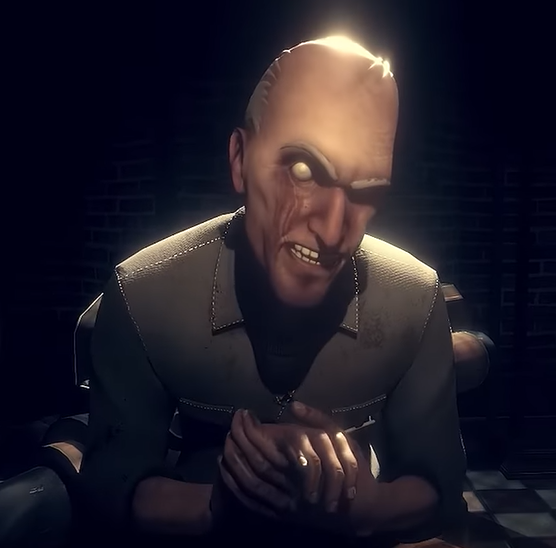 A pretty girl like you shouldn't be wandering around all by yourself.
Voiced by: Tim Simmons

The main antagonist of Bendy and the Dark Revival. He is also the son of Nathan Arch, the business tycoon of Archgate. This unknown man claims to have killed the Ink Demon 211 days ago, and claims that the residents of the Studio must do as he asks in return for saving them. 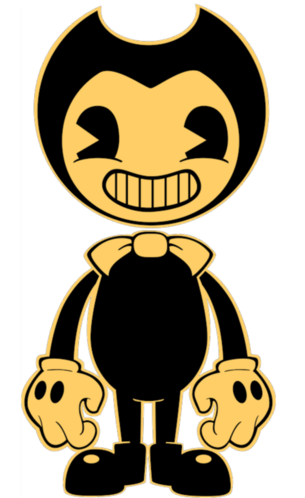 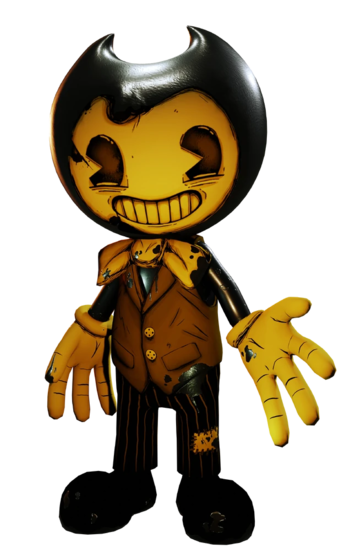 The star of the show, our little dancing devil himself! 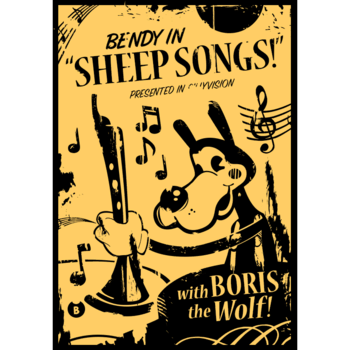 A loveable hungry wolf who accompanies Bendy on his adventures. 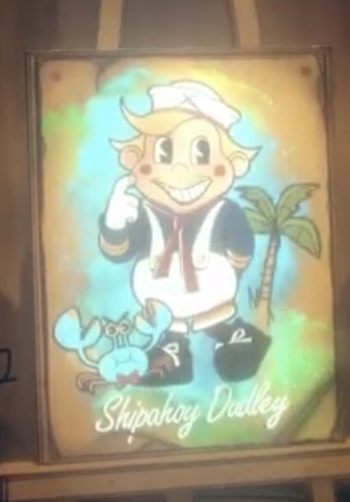 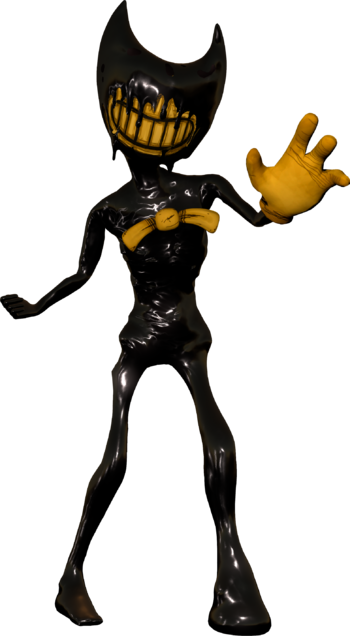 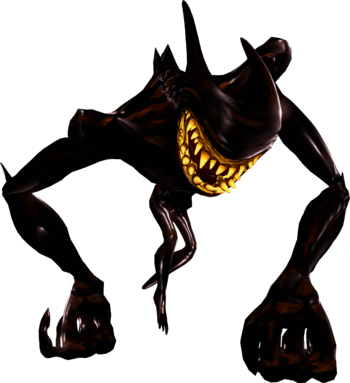 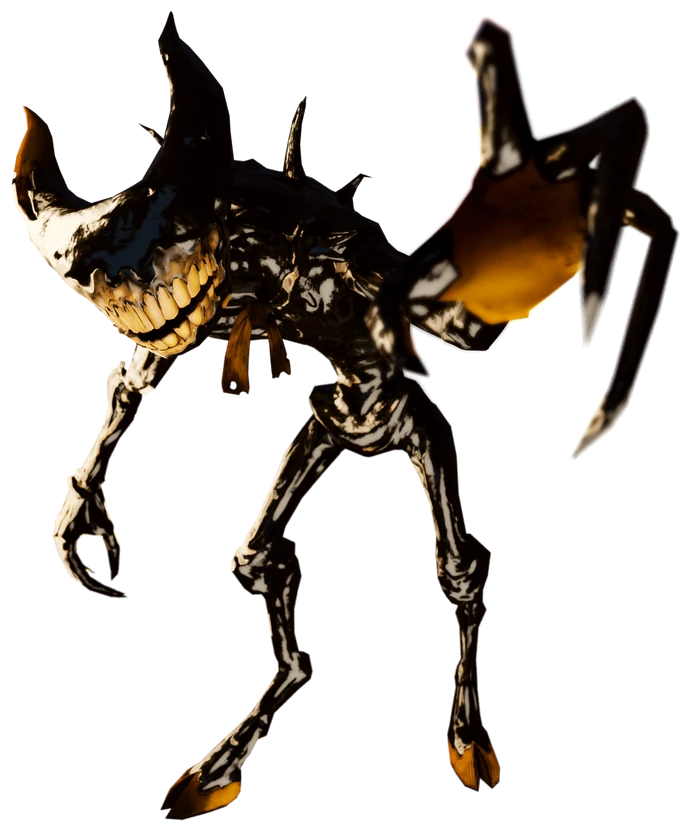 Joey Drew has somehow brought Bendy to life, but in the real world, he isn't so lovable or even harmless anymore. 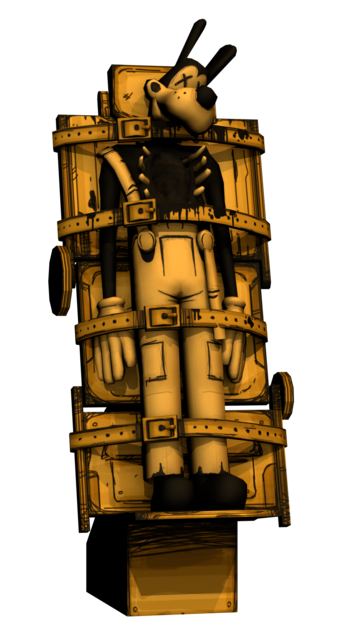 A bunch of dead duplicates of Boris found scattered around the studio.

"I see you there. A new fly in my endless web. Come along now. Let's see if you're worthy to walk with angels."
Voiced by: Lauren Synger

A nightmarish fusion of human and cartoon, Twisted Alice is the Arc Villain of Chapters Three and Four. 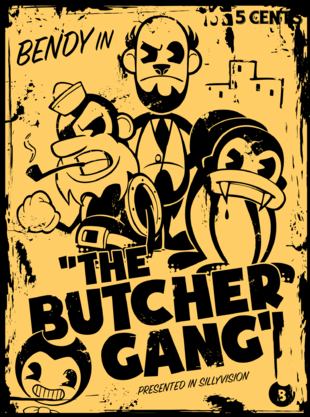 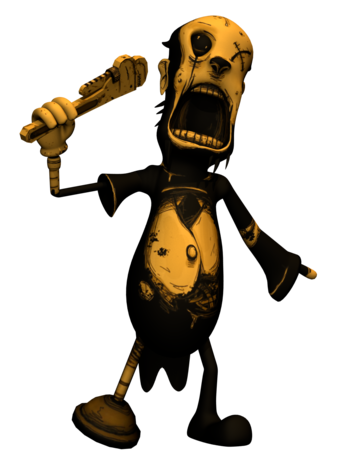 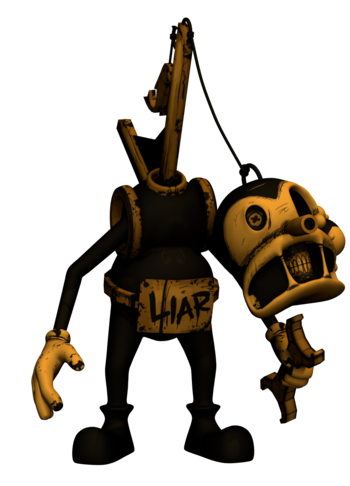 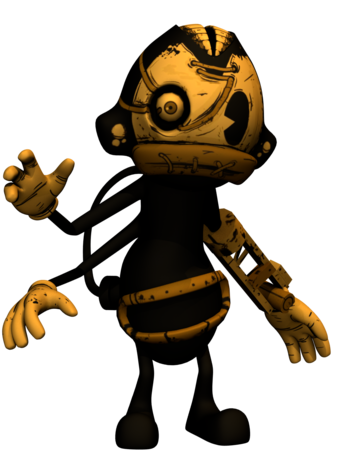 A trio of villainous toon characters that consists of a primate, a pirate, and a spider. Disfigured "living" versions of them begin appearing as enemies in the third chapter. 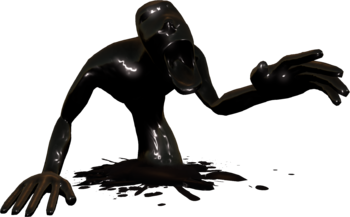 Gross, screaming beings of ink that first appear in Chapter 2. 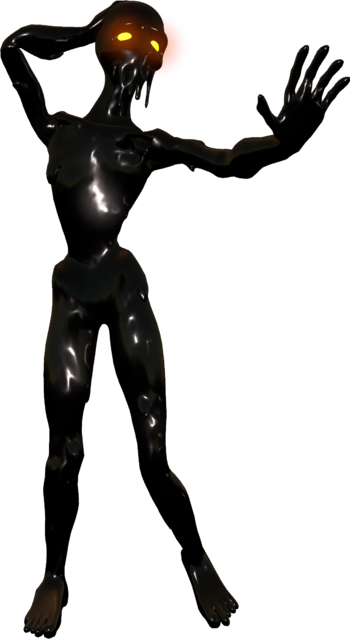 Introduced in Chapter 4, these former studio employees have been trapped underground. They are more docile than the Searchers and pose no threat to Henry until Chapter 5. 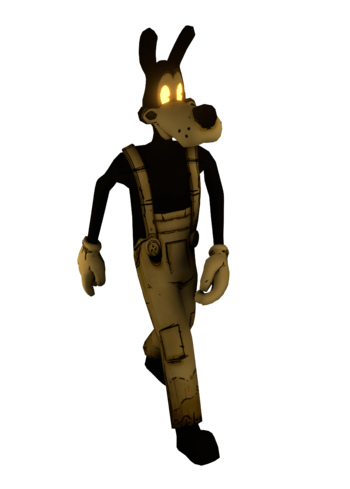 A hostile clone of Boris that serves as a Secret Boss for Boris and the Dark Survival.

Voiced by: Ally Murphy
Wilson's housekeeper, a toon who wears a doll-like mask.
The Keepers

The subject will remain still.
Voiced by: Lani Minella, Jason C. Miller
Mechanical minions created by Wilson to carry out his bidding.
Big Steve
An enormous glutton of an Ink Creature. Mostly docile, unless deprived of food or otherwise provoked.
The Ink Pirate (spoilers) 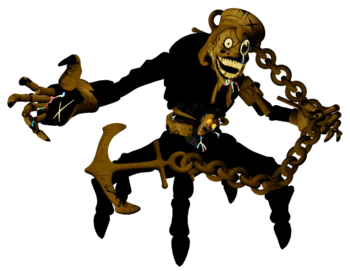 A monstrosity created by the fusion of Wilson Arch and Shipahoy Dudley.
The Ink Machine 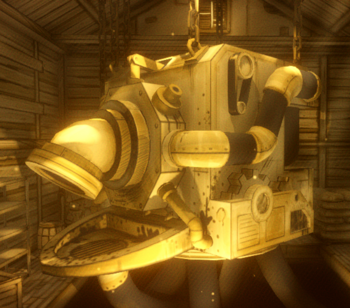 A strange device that runs through the animation studio. Exactly what the ink machine does is unclear, even to the employees.