Music / The Chicks
aka: Dixie Chicks 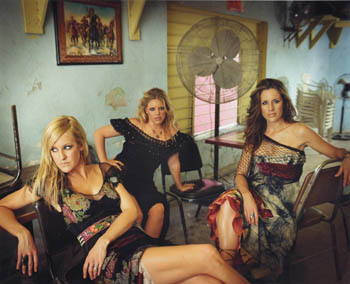 The Chicks, formerly known as the Dixie Chicks, are a long-lasting Country Music group known for its neotraditionalist country and bluegrass influences. The most famous lineup consists of lead singer Natalie Maines and backing vocalists/multi-instrumentalists Martie Maguirenote née Irwin and Emily Strayernote also née Irwin; known as Emily Robison until 2013, who are sisters.

The Dixie Chicks founded in 1989 when the Irwin sisters joined with bassist Laura Lynch and guitarist/vocalist Robin Lynn Macy. The band recorded several bluegrass-influenced albums on indie labels under the production of Lloyd Maines. Macy left in 1992 and Lynch took over lead vocals for the band's last independent album. After signing to Monument Records in the mid-1990s, Lynch left as well and Lloyd's daughter Natalie was chosen as lead vocalist.

In the wake of the George Floyd protests and subsequent removal of negative southern imagery from most forms of media, the group officially renamed to The Chicks in 2020. Their reunion album and first under the new name, Gaslighter, came in 2020. Despite positive reception by fans, the pushback from the 2003 incident still left them pretty much blanked by radio.