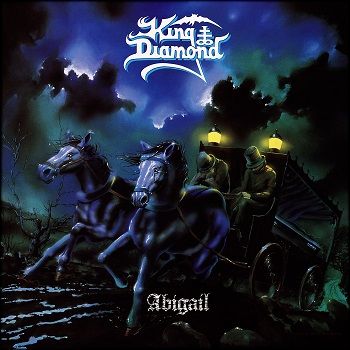 "We are gathered here tonight to lay to rest Abigail La'Fey, whom we know was first born dead on the 7th day of July 1777.
Abigail must be nailed to her coffin with 7 silver spikes.
1 through each arm, hand and knee, and let the last of the 7 be drawn through her mouth, so that she may never rise and cause evil again.
Who will be the first?"
"I, O'Brian of the Black Horsemen."
— "Funeral", the album's opening dialogue

Abigail is a horror-themed Concept Album by Heavy Metal band King Diamond, released in 1987. Widely regarded as a pinnacle of horror among concept albums, heavy metal or otherwise.

Set in the summer of 1895, it centers on 27 year-old Jonathan La'Fey and his newlywed wife, 18 year-old Miriam Natias, who move into a dark and gloomy mansion that Jonathan has inherited. At the mansion's entrance, they meet seven ominous black horsemen who urge them to turn away from the mansion, or "18 will become 9." Jonathan ignores their strange warnings, and during the night he's visited by the ghost of his relative, Count de La'Fey. The Count shows Jonathan to a vault holding the sarcophagus of Abigail La'Fey, the stillborn illegitimate child of The Count's unfaithful wife, who both died 68 years previous. It's then revealed by The Count that Abigail's spirit has taken hold of Miriam's soul, and will soon be reborn unless he takes her life.

Sitting among the band's best-selling works, the album was the first of Roadrunner Records' to break into the Billboard 200. Abigail marks a step up in King Diamond's storytelling prowess, exploring cinematic, horror themes over vivid set pieces, all of it delivered by King's haunting, multi-layered falsetto vocals. More over was the twin guitar attack of Andy LaRocque and Michael Denner, trading off tasteful-yet-epic leads without compromising the flow of the story. The airtight rhythm section provided by Timi Hansen's driving basslines and Mikkey Dee's complex, speed metal drumming was also highly-praised, a massive step in a career that would eventually lead to his joining Motörhead. All in all, the album is a moody, theatrical, riff-laden tale that meticulously weaves its music into the arrangement of its story without sacrificing either.

It was later followed up in 2002 with a sequel, Abigail II: The Revenge. Not to be confused with the Japanese Thrash Metal band of the same name.

"That's the end of another lullaby
The time has come for me to say goodnight..."