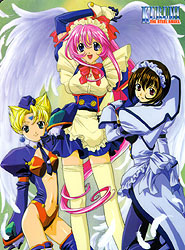 Steel Angel Kurumi is a manga created by the artist duo Kaishaku (who also created UFO Princess Valkyrie and Destiny of the Shrine Maiden note  Kannazuki No Miko ) for Kadokawa's Ace Dash note  after that magazine ceased publication in 1998, it moved to Monthly Ace Next and finally Monthly Shonen Ace in 2000 , which ran from 1997 to 2003. It was later adapted into an anime by OLM Incorporated in 1999 for WOWOW's Anime Complex anthology series.

It's Japan in the 1920s, only not the one we know — the politics are familiar, but steam-powered mechanisms are everywhere. When 12-year-old Nakahito Kagura allows himself to be talked into trespassing in an allegedly "haunted" house, he accidentally activates Kurumi, a busty pink-haired battle android of incredibly advanced design. Because he awoke her, the innocent (and powerful) Kurumi regards Nakahito as her undisputed master, fawning over him and hanging on his every word. And defending him from harm — such as the bullies who sent him into the haunted house, or the steam-powered mecha of the Imperial Japanese Army...

When her creator Dr. Ayanokoji shows up, he is promptly kidnapped by an agent of an even more dangerous force than the Army: the mysterious scientists responsible for the anachronistic technology flooding Japan. With the help of Ayanokoji's former assistant, Dr. Amagi, and a second steel angel named Saki, Nakahito and Kurumi begin a pursuit of her kidnapped creator. In the process, they acquire more allies, battle the forces of their enemies, and learn the secret origin and purpose of the steel angels — and the dangerous secret hidden within Kurumi herself.

As mentioned above, Steel Angel Kurumi was originally part of an anthology series in Japan, so each individual episode is not quite 15 minutes in length. The North American dub by ADV Films includes an extensive set of interviews with the English voice actresses; especially noteworthy is the presence of Claudia "Aeryn Sun" Black of Farscape fame in a surprise role.