Animation / Thru the Moebius Strip 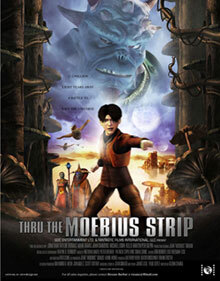 "Arthur, you're almost as bad as Simon!" "It runs in the programming"
Advertisement:

Thru the Moebius Strip is a 3D animated film made in Shenzhen, China, and produced in Hong Kong. The story involves an inventor named Simon Weir, who invents a device that enables him to teleport to anywhere in the universe. Upon traveling to a distant planet, he is captured by a race of giant aliens. Seven years later, his son, Jac, refuses to believe that Simon has died. He locates the teleportation device and embarks on a journey to rescue his father. Along the way, he is caught in the middle of a civil war.

The film was first shown to the public at the 2005 Cannes Film Festival, where it was praised for its animation.

Thru the Moebius Strip contains examples of: