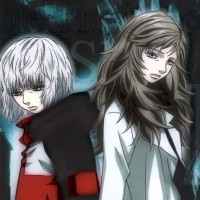 Sometime in the super-present, the fabled and mysterious Tomb of Gilgamesh is discovered by scientists who are digging around in Uruk (modern day Mesopotamia). A research center is promptly set up to study the strange energy which is being emitted by the site, but a series of events triggered by the site's discoverer, Terumichi Madoka, soon result in a global catastrophe which knocks out all electronics worldwide and turns the sky into a giant electromagnetic mirror. Terumichi (who now calls himself Enkidu, after a character in the ancient Epic of Gilgamesh), is labelled a terrorist and promptly vanishes.

Fifteen years later, his two hapless children, Tatsuya and Kiyoko, are in Japan being chased down a city street by some thugs who want to shake them down for some debts owed by their late mother. The children duck into a creepy old mansion, where they run into some gothy teenagers who seem strangely knowledgeable about their situation. The goth-teens, who call themselves the Gilgamesh, rescue the children from the thugs using mysterious psycho-kinetic powers, and then invite the siblings to join their side in a war which will cleanse the Earth and make way for the next evolutionary stage of humanity.

Before Tatsuya and Kiyoko can even give the matter a nanosecond's worth of thought, another group of super-powered children drop by and attempt to get the siblings to join their group, the ORGA, which is opposed to the goth-teens and their fanatical leader — who just happens to be the sibling's long-lost father. The ORGA are led by Kageyama Hiroko, the Countess Von Werdenburg, an enigmatic, elegant black widow who was once a research colleague of Terumichi Madoka, and who is now his bitterest enemy. She claims that her true goal is to save humanity, but is she really all that trustworthy? (And was she really "just a colleague" of their father's? Or something more?)

Gilgamesh is a tale packed with intrigue. Not only does it feature the above characters, there's also a corrupt corporation, with a vicious Psycho for Hire, Kazamatsuri Hayato, at its beck and call, and a group of well-intentioned (but ultimately ineffectual) scientists who are trying their best to get the Earth back to normal. Throw some clones, some tragic backstory and some Ancient Sumerian Mythology into the mix, and you have a series that makes for some pretty compelling watching.

One thing to note before you dive in, however; this series is dark. Very dark. Crows sipping coffee from an iron kettle while sitting at the bottom of a mine shaft in the middle of a moonless winter night dark. The art design is ugly and minimalist at times, which a cynical viewer might blame on a shrinking animation budget, but which also fits very well with the depressing and apathetic tone of the series. There are no true good guys here. The children at the center of the story never really know who they can trust, and they soon find the ambiguity of their situation every bit as dangerous an enemy as any physical monster they may face. That fact — along with its complexity, apocalyptic themes and flawed characters — makes it a very atypical series.

Although it does bear something of a passing resemblance to Neon Genesis Evangelion, which it may have been influenced by, the manga this series is based on dates from 1972 and drawn by Shotaro Ishinomori (of Cyborg 009 and Kamen Rider fame).

For the original Sumerian story, see The Epic of Gilgamesh. No relation to GIRUGAMESH!. For the mightiest swordsman in all Ivalice, click here, or you may find him here. For the Argentine comic book, see here. And for that other popular anime incarnation of Gilgamesh, see here.