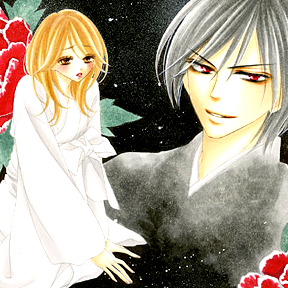 Our heroine and, uh, "hero"

Black Bird is a Shoujo manga by Kanoko Sakuraouji. It tells the story of Misao Harada, an ordinary girl who can see ghosts, spirits and demons, and her relationship with Kyo, the head of a Tengu (bird demon) clan, who she befriended as a little child. Thanks to her Dangerous 16th Birthday, if a demon makes Misao his bride (which is implied to have more to do with sex than it does with nuptials), their clan would become prosperous; on the other hand, if a demon eats her flesh, it will gain immortality. Poor Misao is therefore caught between Kyo, who wants to marry her (against her will, if necessary), and various other badnasties who want to eat her. Romance, uh, ensues.

Not to Be Confused with The Beatles song of the same name from the White Album.