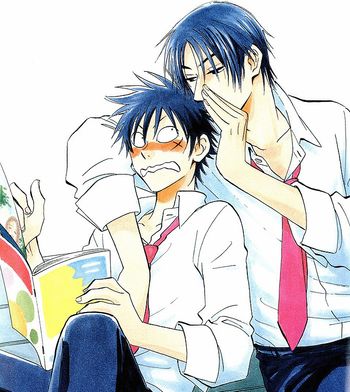 Takeru Azuma: You have two handsome men fighting over you. How do you feel about that?
Yoshida: I'm in hell.

Aitsu no Daihonmei is a Boys' Love series by Suzuki Tanaka which started out as a oneshot for a theme of Ugly Boy Romance. Its popularity has allowed it to expand to 9 volumes and it is still ongoing. The author seems to have a steady pace of one volume per year. All nine have been officially released by a Viz Media subdivision.

The main character is Yoshio Yoshida who's the local Beady-Eyed Loser. He hangs out with Fatty Akimoto and Doodle Face Makimura most of the time, but lately the school's Bishounen Satou has taken a bizarre kind of interest in using Yoshida as an excuse as to why he won't go anywhere outside school with the Estrogen Brigade, teasing him all the time, and kissing him where no one else can see.

Satou and Yoshida end up together almost immediately, though it does take a few chapters for Yoshida to accept it. The series is otherwise about the school antics, romantic shenanigans in which no less than 3 people ask Yoshida out, and Satou being the Center of the Universe to everyone around him even though Yoshida is the main character. The Other Wiki even believes Satou to be the main character because of this.

As the series goes on it gains more or less a plot, getting wilder backstory and breaking out of the School Romance BL genre it was in at times. It's possible the author uses new characters to break out of writer's block as they appear frequently and as needed. Many chapter plots also revolve around school holidays, events, and other things that show how popular Satou is and how while Yoshida can handle this, Satou starts getting jealous rather easily if Yoshida receives new positive attention.

This page Needs Wiki Magic Love. Now with a character page also in need of some love.

Aitsu no Daihonmei contains examples of: