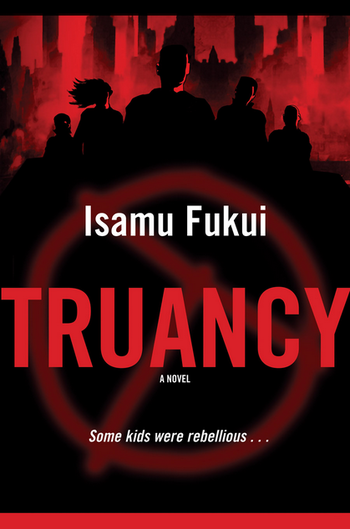 Wherever there is school, there will always be truancy.

Truancy is a trilogy of dystopian novels written by Isamu Fukui. Set in a totalitarian city ruled by its Mayor and Educators, who treat students and minors as second-class citizens, encourage bullying, and make sure that every student's life is a living hell in order to curtail any rebelliousness early in life. The first book follows a fifteen-year-old student named Tack, and a student rebellion calling itself the Truancy. The story is dedicated "to everyone that has ever suffered in the name of education".

Book one, Truancy, largely focuses on exploring the injustices and cruelty of the educational system, which sometimes even results in the deaths of innocent students at the hands of bullies. Fifteen-year-old Takkan (Tack for short) and his younger sister simply want to survive and do well until graduation, but behind the scenes a student rebellion run by a large group of Vagrants is quickly gaining momentum. Meanwhile, Tack meets a young Child Prodigy Umasi in an abandoned district and is mentored by him. After Tack's little sister Suzie is killed in the crossfire of one of Zyid's attacks on an educator, he swears revenge and joins the Truancy in order to achieve his goal.

Book two, Truancy: Origins follows the gifted paternal twins of Umasi and Zyid right before and during the formation of the Truancy. It tells of how they discovered the even deeper levels of conniving and manipulation educators were willing to enact in order to maintain their educational system, why Zyid and Umasi both went their separate ways and chose their respective means of fighting the system. New characters are introduced, and the origins and true nature of the city and its educational system are revealed.

The third and final book, Truancy City, has finally hit store shelves after a several-year long delay. It takes place a year after the end of book one and focuses on a new character introduced in Origins, Cross, Edward's protege, who's taken over the Student Militia after his mentor's death. Tack has he's taken over the Truancy's leadership after Zyid's death—and he's good at it too. He and the Truancy have managed to take most of the city from the educators, and have deemed their territory Truancy City. However, things become much more complicated when the military for the Government, those who were controlling the Mayor and the Educators to begin with decide to take matters into their own hands.