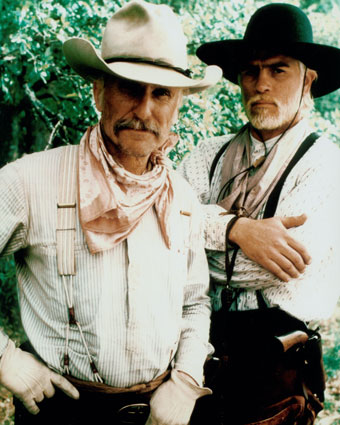 Robert Duvall as Gus MacCrae and Tommy Lee Jones
as Woodrow Call.
"I wanna do it, Gus. I wanna see that country, before the bankers and lawyers all git it."
— Captain Woodrow Call
Advertisement:

Lonesome Dove is the name of a highly-regarded Western novel by Larry McMurtry published in 1985. It was also adapted into a 1989 Emmy-winning four-episode television miniseries. The novel was the first of a tetralogy of novels, followed up by a sequel novel, The Streets of Laredo, and two prequel novels, Dead Man's Walk and Comanche Moon. All were made into miniseries. It is also considered the first part of an informal trilogy of Westerns staring Robert Duvall, with the second being Open Range and the third being Broken Trail.

In 1876, former Texas Rangers Captains Augustus McCrae and Woodrow Call run a livery in the small border town of Lonesome Dove. When their old colleague Jake Spoon arrives with tales of the unsettled territory in Montana, Call is inspired to drive cattle there to start a ranch.

The miniseries boasted an All-Star Cast headed by Robert Duvall and Tommy Lee Jones as Gus and Woodrow, with Diane Lane as Lorena, Anjelica Huston as Clara, and Danny Glover as Joshua Deets. Also features a pre-stardom Steve Buscemi as Luke.