Literature / A Song of Ice and Fire 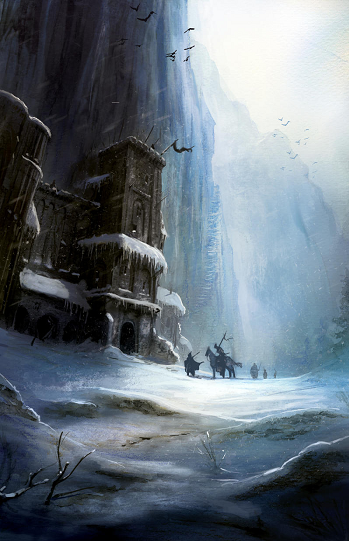 "He is the prince that was promised, and his is the song of ice and fire."
— Rhaegar Targaryen, A Clash of Kings
Advertisement:

A Song of Ice and Fire is a bestselling Doorstopper epic fantasy series written by George R. R. Martin. The series premiered in 1996, and there have been five books released in the series so far, with the most recent published in 2011.

Set in a medieval fantasy world, the series primarily follows various political and supernatural threats to the Seven Kingdoms of Westeros, a vast nation still recovering from a civil war that ousted the previous ruling dynasty of three centuries, the Targaryens.

The plot begins by focusing on the Stark family, an ancient and venerable noble house that rules the frigid and sparsely populated North. Forced to journey south and enter the unfamiliar territory of the capital, King's Landing, the family must suddenly contend with deadly court politics, intrigue, plots, feuds and mysteries from a host of rival factions.

As the nobles busy themselves playing the game of thrones, a supernatural threat looms beyond the Wall to the far north that threatens to destroy the Seven Kingdoms of Westeros and drive the continent into a permanent winter. Meanwhile, the last Targaryen scions, now in exile, have their sights set on reconquering the Seven Kingdoms and reclaiming their family's throne with fire and blood.

The novels feature a large ensemble cast, narrated in chapters that relate action from the third-person limited perspective of alternating protagonists, some of them on opposing sides of a conflict. Many of the plots and subplots of the protagonists overlap with each other directly and indirectly, while others merely parallel the central action or counterpoint it in key ways.

In addition to the main series of novels, there are a variety of spin-offs and related media, including prequels and in-universe history texts.

For adaptations and other spin-offs see Franchise.A Song Of Ice And Fire.

For more information, see the character sheet and GRRM's blog

As the page for the novels is already considerable and ever growing, please enter the tropes found only in the live action series and video game on their own pages.

Stannis Baratheon muses over the Greyjoy Rebellion and how he was able to defeat a seemingly superior naval force using military tactics compared to his enemies' use of brute strength.

Example of:
Soldier vs. Warrior

Stannis Baratheon muses over the Greyjoy Rebellion and how he was able to defeat a seemingly superior naval force using military tactics compared to his enemies' use of brute strength.