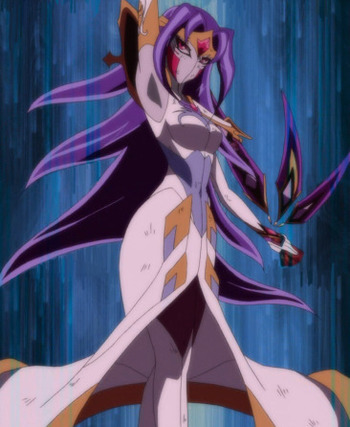 The fanfiction starts off at the point before the beginning of canon when IV (Quattro in the English Dub) attacked Shark and Rio Kamishiro and burned one of them alive. However, while it was Rio who was burned in canon, Shark is the one who gets burned in this fanfiction, which basically causes the twins to switch roles. Rio takes her brother's place as one of the main character in comparison to the very minor and under used role she had in canon. She becomes the main protagonist alongside Yuma Tsukumo and gains the same desire for vengeance against IV, all the while she is roped into the Number Monster Conflict and starts collecting Numbers of her own.

However, the changes that created this Alternate Timeline don't stop there! OH NO! The author further expands the story by having the Seven Barian Emperors make their move early. Instead of waiting until the start of Season Two to make their presence known, they travel to Earth and end up participating in the World Duel Carnival, which basically results in Season One and Season Two of ZEXAL being combined into one large overlapping story where the excitement is at its peak and Anything Goes!

While the other Barians are off hunting for Numbers, The Barian Emperor, Durbe has a second mission, to find and reunite with the two missing Barian Emperors, Nasch and Merag, and once he bumps into Rio, he immediately notices a resemblance and believes that Rio is actually Merag. He sets out to see if this is true by forming an alliance with her in the Number Hunting Crusade, which begins to develop into the main romantic pairing of the story.