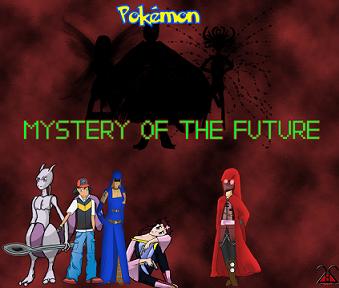 That's not even all of the Future Crew
"Existence is separated into three common virtues: God, Man and Beast. The Gods sit atop their thrones, watching the men tame the beasts. Shall the beasts rebel and become men and men become God and God becomes Beast. The Trinity is known as the Mass. The Pool of Existence cannot extend beyond and therefore those who are neither God, Man or Beast are Demonic. These Abominations are born of original sin and gain their power through negative spirit. They gain fragmentation of true original thought and thus must be exterminated. "
— ''Firstborne 1:09"

Pokemon X-Cell (Published January 6 2010) is a series of Pokémon Fanfics by Experiment 282.

It opens with two strangers, named the Blue Maiden and Lord Green, in the middle of a a conversation, claiming they've captured the Pokemon they were looking for. It then cuts over to Ash, Dawn and Brock head to Shadow Town Pokemon Center after Ash has a Pokemon Battle to shelter from the oncoming rain and decide to stay over the for the night. Dawn points out the strange image on the wall and tries to pin point it, knowing Shadow Town had a history for catering notable travelers. The Nurse Joy overhears it and states the image is of the Legendary and mythological Legion Leaders. She also backs up Dawn's story by saying that Aura Guardians have come and go to this Pokemon Center, as it has the object known as the Aura Orb to see into the distant future. Each has seen a part of a massive war in the not too distant future and as a result the painting was made of the Legion Leaders. Brock blurts that Ash has Aura and Nurse Joy allows Ash to have a try. He holds it, seeing a several images and visions but not quite understanding them, as well as witnessing someone getting stabbed in the back by a Scyther. Ash is too stunned to say anything. They head off to bed, falling asleep. Then wake up.....IN THE FUTURE...not just that, but they're next to familiar faces without knowing why...

It gets worse. It uses a mixture of mystery, Violence, horror, with a touch of romance and action, as well as plenty of Mind Screw for all.