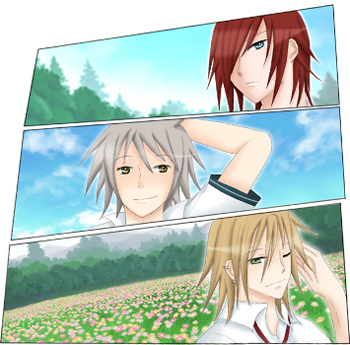 Love Interests from top to bottom: Kaius, Ryuu, and Lucan.

(P)lanets is a freeware otome visual novel created by TeaCup Productions in Ren'Py.

Marin Kazuoki is just an average high school student who, despite the fact that she may be a bit of a slacker, gets good grades, cares about others, and has a fairly optimistic view on life. One day, Marin accidentally falls down a flight of stairs at her school. When she wakes up, she finds that she thankfully does not have a concussion or any major injuries; however, she has the newfound ability to read minds.

After being overwhelmed by her new power when she returns to school the next day, Marin rushes home to find a boy named Kaius waiting at her door who invites her to attend “Planets”, the Psychokinesis Learning Academy for New and Exciting Tactical Studies, a school for psychics to learn how to control their powers.

Of all the students at Planets, Marin mostly interacts with Ruiko, her roommate, and three love interests: Kaius, the misunderstood jerkass loner, Ryuu, the flirty delinquent, and Lucan, the kind and gorgeous Big Man on Campus.