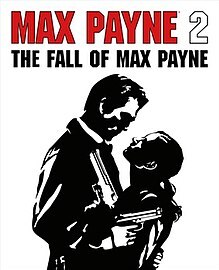 Max Payne 2: The Fall of Max Payne is a Third-Person Shooter video game, developed by Remedy Entertainment and released in 2003. It is the sequel to the 2001 video game Max Payne, and the second game in the Max Payne series.

Two years after the events of the first game, Max Payne is back working as a detective for the NYPD. He's soon forced to investigate a highly organized and well-funded group of assassins who are wiping out the powerful syndicate The Inner Circle, while becoming entangled with the Circle's possibly-trustworthy-who-knows hitwoman Mona Sax.

The game features better physics and graphics, actual in-engine cutscenes with new animation beyond the standard AI movements, more varied gameplay (including having Mona appear as a playable character for several chapters), and an original song by the newly-formed Poets of the Fall. It also rewarded patient players with several additional stories they could choose to watch; if Max stopped at the various televisions scattered around the game, he could catch the latest episode of the obnoxious animated series Captain Baseball Bat Boy, the self-mocking cop show Dick Justice, the amusing period soap Lords and Ladies or the surprisingly creepy, Twin Peaks-like psychodrama Address Unknown, all of which seemed to revolve around Max's life somehow.