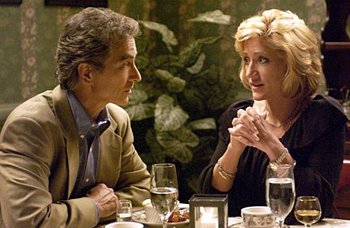 Tony B continues to work for the linen fleet while he studies to earn his massage license. He faces a setback when he falls carrying a load of linens out to his truck, which is then stolen. Tony B's boss, Soongyon Kim, is immediately suspicious of his ex-convict employee, telling him he would be fired if not for Tony Soprano's sake.

Tony, meanwhile, finds he can no longer take AJ's brattiness while they live alone together. After an argument over a bowl of cereal escalates into a physical altercation between father and son, AJ moves back in with Carmela. Carmela, newly single, enters a courtship with AJ's college counselor, Mr. Wegler. As they kiss in Wegler's car after a date, Carmela reveals that she has never been with a man other than her husband. Apprehensive about the prospect of breaking her marriage vows (though they are separated), Carmela consults with Father Phil Intintola, who is adamantly opposed to the affair and is implied to be jealous. Carmela and Wegler consummate their relationship at his home.

Supported by his girlfriend Gwen, who he met through correspondence while in prison, Tony B passes the test for his massage license. His good fortune continues when the stolen truck is found to have been taken by some kids, vindicating him. Kim has a change of heart regarding Tony B, admiring his work ethic, and proposes a business partnership; Kim owns a vacant storefront where Tony B can set up his own massage parlor. Tony B enthusiastically agrees.

Carmela confesses to Father Phil that she slept with Wegler, and he reasserts his disapproval. Nonetheless, the affair continues. However, Carmela remains troubled by AJ's terrible academic performance. This distracts her one night with Wegler, and she suggests he could do something to help AJ. When Wegler doesn't give a satisfactory response, she abruptly leaves, giving him blue balls. The next day Wegler coerces another of AJ's teachers into changing his test scores, and Carmela returns to him enthusiastically. As this becomes a pattern, Wegler begins to suspect that Carmela is manipulating him with sex in order to help her son academically. When Wegler explains this to Carmela in crass terms, she angrily breaks his lamp, threatens him, and storms out. Later she lays in bed in a melancholy state while her father fixes the bedroom door frame. Carmela asserts that because of her marriage to Tony, her own character will always be questioned.

Tony B has another stroke of good luck when a car speeds by him and Gwen, dropping several vials of crack cocaine and a large amount of drug money in the bushes nearby. Rather than invest in his business, Tony B spends the windfall cash on gambling and clothes, spending more time with the Soprano crew. As the money runs out, Tony B grows disgruntled with the discrepancy between his fun, carefree night life with the mobsters and his unglamorous labor during the day. His mood is worsened by frequent hangovers and a lack of sleep, leading his relationship with Gwen to deteriorate. One day as Tony B paints the interior of the massage parlor, he is visited by Kim. Irritated by his boss, Tony B lashes out at him and physically assaults the man, throwing away his dreams of massage therapy. Out at dinner with Tony S, he broaches the subject of the boosted airbag job Tony S had offered him, finally ending his stint as a civilian.