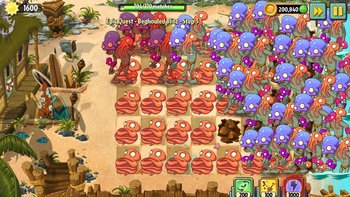 Popcap Games was always good at making cephalopods huge threats.
"I hate those confounded bungees!!! I hate them with a passion. And a vengeance. A whoop-a-dee-doo! Here come those idiots now!"
— Crazy Dave, just before level 5-5

I know your type: hard, fast, and strong, you wanna make the player's strategy all wrong, and then make him throw his iPad at a wall that is near.

open/close all folders
Plants vs. Zombies 1

All of the large robots in general can withstand instant-kills more than once and most of them have very nasty abilities. You WILL need that E.M.Peach.

The special Zombies all gain a very dangerous ability whenever their Jam plays. Or if they're fought in Modern Day, in which case they don't even need their Jam:

None of the Dinosaurs in this world can be attacked or affected by Plants (with the exception of Perfume-Shroom), and all of them can greatly help the zombies in some way or other. Thank goodness that the Perfume-Shroom charms them to affect the Zombies instead... but not only it has a very bad recharge time for such an expensive plant, it can only be used in Jurrasic Marsh. note As in, if you play Battlez, which is set in Modern Day, you cannot use Perfume-Shroom even though there may be dinosaurs in Battlez

Worried about your brains now? We can help you out.