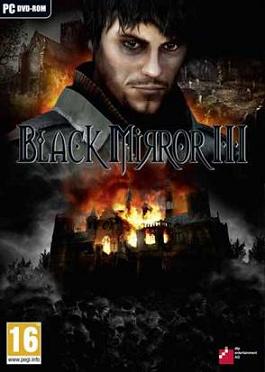 That fireball is the least of his problems.
Advertisement:

The Black Mirror is a 2003 point-and-click horror adventure game developed by Czech studio Future Games. The name refers to the ancestral manor of the Gordon family located in England.

After the mysterious death of his grandfather, Samuel Gordon is forced to return to his home Black Mirror Castle after twelve years. Everyone believes his grandfather committed suicide, but Samuel isn't so sure about that and wants to find out what really happened. It doesn't help that Samuel suddenly gets a lot of vivid nightmares and excruciating headaches. Soon, strange and unexpected deaths occur in the nearby village Willow Creek and Samuel gets closer and closer to a dark secret.

Black Mirror 2 (2009) and Black Mirror 3 (2011) were developed by German studio Cranberry Production. They take place in the 1990s, twelve years after the first game. The college student Darren Michaels is working at the local photo shop in Biddeford, a small town in New England. One afternoon, he meets the beautiful Angelina who promptly gets accused of murdering Darren's boss Fuller. While trying to help her, he realizes things aren't what they seem to be: a mysterious stranger is following Angelina around and Darren himself gets involved in a series of strange events that eventually lead him to the small English village of Willow Creek. He learns about the Gordon family and a century-old curse that is connected with them.

A reboot titled Black Mirror was released in 2017. It was developed by German studio King Art Games and published by THQ Nordic.

Not to be confused with the British TV series of the same name.