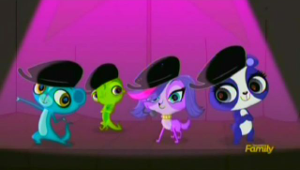 "Pitch Purrfect, you're about to meet your match!"
Written by David Shayne

Blythe, having obtained Betty's journal from Speedy Shellberg, is reading it in the day camp, too absorbed in it to notice that Zoe wants to talk to Blythe about her upcoming audition for the Pitch Purrfect tryouts or that Penny is causing a mess with paint with Minka and Pepper. To that end, Russell voices his concerns about Blythe not supervising the pets as she's supposed to do, though he is interrupted mid-way seeing Vinnie frantically rolling Sunil, trapped in a hamster ball. Still failing to get Blythe's attention, Russell climbs onto Blythe's head and addresses Blythe from there. He finally gets her attention, but she proves to have been completely unaware of the pets' antics or that Russell had been trying to address Blythe for a while. Noticing that, Russell tells Blythe that, although he understands it contains information very relevant to Blythe, Russell feels she's become obsessed with the book. Blythe feels insulted in what Russell said and that he distracted her from reading it, so she excuses herself to continue reading the journal. Russell takes offense that he has been accused of not knowing the meaning of "obsessed," so he heads over to the store area to use Mrs. Twombly's dictionary in her office. As he looks up, however, Russell notices that all of Mrs. Twombly's doorknobs are gone, freaking out so much he falls off the table.

Zoe heads out into an alleyway full of singing cats and meets Delilah, a cat Zoe had previously met at the Pet Fashion Expo, who is holding an audition for a spot in Pitch Purrfect, her team for the upcoming Alley Cappella singing competition. Around her are large quantities of cats, all of them also singing, but Zoe notices one conspicuously missing individual: Though Delilah's other singing partners Milah and Chilah are still around, Twila is not present. When Zoe asks Delilah, she explains that Twila is on maternity leave and is why the auditions are happening in the first place—they desperately need a soprano voice, or they will certainly lose the competition. With those introductions done, Delilah immediately proceeds with the tryouts.

Russell wakes up on the floor, with Blythe and most of the other pets staring down at him. When Blythe asks why Russell was lying on the floor, he instantly screams that Mrs. Twombly's doorknob collection has been stolen, pointing to the empty wall nearby. The others look up and also notice the missing doorknobs. Flabbergasted is Blythe, who wonders who would even want Mrs. Twombly's doorknob collection. Mrs. Twombly appears from the adjacent room, however, and wonders what Blythe is concerned about and who she's talking to. Needing a quick lie, Blythe suggests Mrs. Twombly go take a nap because Blythe is concerned about her looking tired. However, Mrs. Twombly says that she's far too excited to sleep because she's out to go get a surprise. Blythe, confused, asks what's going on, to which Mrs. Twombly asks if Blythe knows what the word "surprise" means. This fills Mrs. Twombly with the urge to look it up in the dictionary in her office, but Blythe recites the definition verbatim, calming Mrs. Twombly down and getting her out of Littlest Pet Shop for an hour to go obtain something.

The Littlest Pet Shop regulars regroup, with Blythe telling them that together, they need to find the doorknobs before Mrs. Twombly gets back. Vinnie is worried that they'll fail because they've never had to look for her doorknobs before, but Russell, ever ready with a plan, cordons off the front area with police tape while dressed as an FBI agent. He tasks Blythe with dusting, then hands Sunil, Vinnie, and Penny Ling a tablet and tells them to search online to see if the thief is attempting to sell it. Russell brings up the possibility of the thief disposing of the doorknobs and assigns Pepper to the dumpsters. This leaves Minka, who forcibly becomes Russell's assistant, then aggressively orders everyone else to get to work, causing everyone to run around in panic. This greatly pleases Russell, who accepts Minka as his assistant.

In the alleyway, Fluffy sings on the dumpster for Delilah the way a cat would typically sing but gets so into it that she walks off the dumpster and into a puddle. Delilah is not pleased and requests the next potential singer come up. That next one is Zoe, who tells everyone she has never lost an audition she applied for, then goes into a fantasy sequence about how she'll be the face of the band as she sings her piece. Delilah, Mila, and Chilah are thoroughly impressed, but because the substitute role must be filled by a cat, they settle on Fluffy. When Zoe asks why she was even invited in the first place, Delilah answers that she forgot Zoe is not a cat.

It has been a little bit under half an hour since Mrs. Twombly departed the building, and Russell checks up on the group assigned to scour the Internet. They haven't turned up anything because the three of them are unable to agree on which search engine to start with. Russell, livid, tells them to pick one and stick with it with Minka equally incensed (or pretending to be). As soon as the two of them leave, however, and Sunil finds a link to a site showing old pet food commercials. This also catches Vinnie and Penny's interest, and they wind up looking at those instead of looking for leads. A strange smell then wafts into the room, and Pepper comes in carrying two big bags of trash. Russell thinks she's found the doorknobs, but Pepper is just there to tell Russell that the Littlest Pet Shop is good at separating recyclables from trash. She sees Russell's unimpressed look on his face and goes back to the dumpsters to continue searching. Russell goes over to Blythe, who has gone back to reading Betty's journal while remarking on her fashionable rebelliousness. Russell hands Blythe her fingerprints back to her, and Blythe gets back to work dusting the office.

As the three pets continue watching old pet food commercials, they stumble across one for Hearty Time. When it finishes, Penny wonders if that's Zoe in the commercial, and as Sunil lowers the tablet, they see a depressed Zoe confirming that it is indeed her. She laments about how she can no longer win auditions, and the three on the couch, especially Sunil, are aghast that Zoe was turned down. Zoe complains in the corner about how she was the best singer but that Delilah rejected her for being a dog. Sunil perks up upon hearing Delilah's name and starts thinking fondly of her but is snapped out of it via a slap from Penny. When Zoe talks about how she really wanted to compete in the Alley Cappella championship, Penny accidentally gives Zoe the idea to start her own singing group.

Russell spends his time creating a diagram of possible leads using cut-outs, pushpins, and strings, conspiracy-style. His diagram demonstrates that the most likely thief is himself. Minka, always ready, slaps a pair of handcuffs onto Russell and drags him away. Russell soon convinces Minka that he couldn't have stolen the doorknobs though, so Minka sets him free. Russell heads back to his diagram, frustrated that he cannot deduce anything himself.

Near the Blythe Style rack at the front of the store, Zoe gathers Sunil, Vinnie, and Penny, giving them berets similar to her own and calling the quartet There's Note Stopping Us Meow. Penny and Sunil love the name, but Vinnie doesn't understand it.

Blythe gets pulled back into the journal, not noticing Russell and Minka have entered the office. Russell, once again, has to pull Blythe's attention out of the journal and onto him. Blythe assures Russell that they still have plenty of time, but Russell tells her that they don't and that the hour is almost up. Hence, Russell will now handle Blythe's part of the investigation, and Blythe will now have to stall Mrs. Twombly and prevent her from entering her office until Russell can determine what happened. Blythe rushes over to the front, with Russell warning her not to get distracted again.

When asked what There's Note Stopping Us Meow will sing first, Zoe suggests "Not Every Star Is in the Sky," but Vinnie would rather sing "Old McDonald," Sunil wants to sing "Frere Jacques," and Penny requests to sing "Jingle Bells." Zoe, angered by the noise, tells them that the rules are that they cannot sing the same song as another entry and that they cannot sing kids' songs, which shuts them up. Blythe runs by, determined to stop Mrs. Twombly, when she sees the four of them and asks why they're all wearing Zoe's berets. Penny responds that they're going to try to compete in the Alley Cappella championship as their own entry. Before Blythe can inquire further, Russell yells at Blythe to go stall Mrs. Twombly, so Blythe runs outside to the bus stop. She then opens her journal and continues reading.

At a stage made of badly-crafted wooden boards and a curtain made of rags in a different alley, the Alley Cappella championship is about to begin, with the announcer mentions Pitch Purrfect as the reigning champions. Backstage, Delilah sees Zoe and asks how she's been doing; Zoe tells Delilah that she founded a singing group, There's Note Stopping Us Meow, to give Delilah some competition. It is Pitch Purrfect's turn to come up, however, so they take the stage and sing "Not Every Star Is in the Sky" to roaring applause. Zoe becomes outraged, with Vinnie, Sunil, and Penny pointing out that they effectively stole Zoe's song. Penny asks if they can sing the same song but better, but Zoe says they shouldn't. As Pitch Purrfect returns backstage, Zoe accuses Delilah of stealing Zoe's song. Delilah tells Zoe that Mila obtained permission, but Mila points to Chilah, while Chilah points to Fluffy. The other cats back away, but Delilah says to Zoe that there's no changing what's already happened. When the announcer calls for There's Note Stopping Us Meow, Zoe makes the decision to drop out of the competition, at a loss for what to do. At that moment, Vinnie's stomach growls and he starts talking about what to eat. This gives Sunil an idea.

At the bus stop, Blythe continues to read Betty's journal. The bus comes by, picks up the old man at the stop, and drops Mrs. Twombly off. It takes Blythe a moment, but she remembers to try to stall her. At the Littlest Pet Shop, Russell actually finds a fingerprint on one of the glass vases, and he calls for Minka to bring the tablet back so he can compare fingerprints using an app.

The spotlight turns on in the middle of the stage, and Vinnie walks out, followed by Sunil and Penny. They start singing backup as Zoe lowers herself down on a pet-bowl-shaped platform, singing an a cappella version of the Hearty Time Pet Food Jingle. This rendition captivates the audience and the judges alike, though Delilah considers it "bonkers."

Later, Blythe sits on the armchair with Russell, Pepper, and Minka, apologizing for getting far too caught up in Betty's journal and that she doesn't need to rush through it. Vinnie, Sunil, and Penny then enter the day camp through the hamster tubes, proclaiming that There's Note Stopping Us Meow has dethroned Pitch Purrfect as the Alley Cappella champions. Zoe decides to celebrate by eating from her personal stash of Hearty Time pet food that she's kept for many years—while most of the others in the room find it smelly and gross, Vinnie loves the way it tastes like old tires.