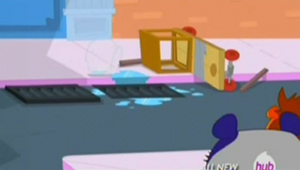 "Note to Self: Remember to install brakes…"
Written by Guy Toubes

At school, Blythe finds Josh passing by, and instead of freaking out, she is able to greet Josh normally, who tells her that he's heading for work. Ecstatic, she tells Youngmee that she's going to try it again, and on the second pass-through, they repeat the same lines. When Youngmee hears it, she suggests to Blythe to find out where he works and chat with him there. Blythe searches for Josh through the hallways again, and upon finding him, asks him where he works, though Blythe is in for a shock when she finds out Josh works at the Largest Ever Pet Shop.

At the Littlest Pet Shop, Minka rides down a ramp on a makeshift scooter and jumps over where Sunil once stood, making a safe landing. When Russell asks what she thinks, however, Minka says she's dissatisfied, desiring to do the more impressive stunts like what she sees on TV. When discussing if she can "jump a shark," they overhear a new voice: Goldie, a goldfish in a mostly featureless fishbowl. Goldie, an admitted thrill-seeker, is incredibly bored with his life contained in a small bowl, and seeing the other pets scamper about having fun, desires to have some of it too. Hoping to reach a compromise, Russell puts Goldie, still in his bowl, where Sunil once sat. Minka performs her stunt again, but Goldie is still disappointed as he didn't get to do anything. When Pepper suspects Goldie is still not happy, Goldie tells the pets that he wants to see the world and not be confined to his fishbowl.

As Blythe and Youngmee walk home from school, Blythe continues to feel astonished that Josh works at the Largest Ever Pet Shop, too busy thinking about that to pay attention to Youngmee, who asks Blythe if she remembers the math homework as Youngmee forgot to write it down. Blythe, figuring the Biskit Twins must be involved, wonders if they coerced Josh into working there. Curiosity getting the better of her, Blythe readies herself to go over to the Largest Ever Pet Shop, taking Zoe and Minka with her, as Youngmee walks away to contact Sue about the math homework.

Russell finishes his work to help Goldie travel around more freely, which consists of taking Minka's scooter and removing the handlebar and its post, placing Goldie's bowl on the board, and putting together a loose cubic frame around the bowl. After giving Goldie some basic instructions, he gives the device a push, but it proves too fast, and Goldie frantically steers himself out of danger around the day camp room. He comes to a safe stop in front of Russell, but Vinnie, hoping for him to get more thrills, shoves him as hard as he can, which sends Goldie rolling at full speed through the doggie doors and out of the building. The other pets follow Goldie outside with Mrs. Twombly turned the other way dusting her shelves. Once outside, Russell berates a regretful Vinnie about the consequences of his actions.

Blythe has made her way to the Largest Ever Pet Shop, where she stands hesitantly in front of the automatic doors, causing them to open and close rapidly. Josh, who's sweeping the floor near the entrance, notices this and walks over to casually ask if Blythe will enter the store. Blythe makes up an excuse about forgetting a shopping cart and walks in with Zoe and Minka sitting inside the cart.

The remaining five pets chase Goldie down the sidewalk. Goldie's contraption rolls to an intersection, zooms across the pedestrian crossing, turns a sharp left, and crashes shortly afterwards, though all that's visible is water splashing. The pets do see this, however, and are horrified. They run over and see that Goldie has fallen down a storm drain on the curb. Peering down, Russell regrets not having installed brakes.

At the Largest Ever Pet Shop, Blythe sneaks around the store, spying on Josh. She turns a corner to try to catch up to him but finds Whittany and Brittany instead, who immediately question what Blythe is doing in the building. Blythe tells them she's shopping, which confuses them briefly. Whittany then spots Josh walking down an aisle behind Blythe, and the twins run over to him. After the twins shower him with praise, Josh says he's simply taking out the trash. The twins offer to help, though they prove completely ineffectual. Whittany simply grabs the trash bag on the floor as Josh drags it, with Whittany still clinging onto it, out of the building. Blythe, having come over to see what's going on, decides to continue following Josh, this time to see what the Biskit Twins are up to. She sees the three of them go into a storeroom where Whittany and Brittany are both trying to hog Josh for themselves. At first, Blythe thinks Josh is into the twins, but Zoe points out that while Whittany and Brittany like Josh, he does not necessarily like them back. A bit comforted, Blythe continues to stay in Largest Ever Pet Shop at Zoe's and Minka's insistence, but Blythe can't help but look back at Whittany and Brittany fawning over Josh.

As the pets prepare to head down the storm drain, Sunil warns them of a giant alligator who lives in the sewers below Downtown City. This does not deter Russell, however, as he jumps down the drain, pulling Sunil with him, with Pepper, Penny, and Vinnie following. Russell follows a string of puddles he finds on the ground, but the trail leads to the main channel below within a few feet. Vinnie starts feeling doubts about Goldie's survival when a troupe of creatures living in the sewers point out that they've lasted for as long as they have by repurposing things people throw away. Using them as an example, Russell figures he and his friends can do the same, and they gather hamburger wrappers, which are waxed, and fold them into boats using sticks as oars.

At the Largest Ever Pet Shop, Zoe tries on a number of dresses but is dissatisfied with all of them. When Blythe figures there's nothing too good at Largest Ever and decides to leave, she hears Josh coming back with food, then overhears him talking about his two recepients being "so cute" and asks them to stop kissing him. An upset Blythe throws in the towel and walks away depressed, but Zoe has her doubts and puts an ear to a nearby shelf to try to glean any more information. She continues to hear Josh lather affection and, having heard enough, runs around the shelf to bark angrily at Josh, only to find out he's actually speaking to chinchilla twins Cashmere and Velvet. Having realized that the Biskit Twins are not present and Josh recognizing Zoe and Minka as Blythe's companions, Zoe and Minka retreat from embarrassment.

The other five pets, still traveling down the sewers, call out for Goldie, but he's nowhere in sight. Russell spots a figure coming out of the water, mistaking it for Goldie, and calls out for him. The figure instead turns out to be the giant alligator Sunil warned about, who promptly apologizes for almost swallowing them. The alligator, known as Big Al, tells the pets that he helps the other animals in the sewer by compacting the trash that floats by and bringing it over to them. Russell asks if he's seen a goldfish go by, to which Goldie passes by them unaware. Their screaming for Goldie goes unheard as he continues to swim downstream. Big Al then nervously warns the pets that a water treatment facility exists at the end of the place, where their filtration system begins with a large fan that can slice Goldie to pieces.

Zoe and Minka run out of the Largest Ever Pet Shop to tell Blythe that Josh was simply talking about the chinchillas, which relieves Blythe. Josh follows Zoe and Minka out of the store to make sure they reunite with Blythe and asks Blythe if she knows where to find chinchilla twigs, as the Largest Ever Pet Shop does not stock them. Blythe timidly informs Josh that Littlest Pet Shop does carry them and to come over sometime for them. Josh asks Blythe if she can accompany him there, and Blythe gladly accepts.

As they chase Goldie down the channel, Big Al turns perpendicular, blocking the other pets from going any further, pointing out that this is as close to the turbine as they can go before the current becomes too powerful for them to escape. They see Goldie leaping high into the air in panic, having now noticed the spinning blades. Russell sees a plastic container and a rope floating by, however, and ties one end of the rope to the container and the other end to Big Al's jaw. Russell aims squarely at Goldie, and Goldie leaps in, with Big Al chomping down quickly enough for the container to fly back to safety.

Goldie and the other pets return to the Littlest Pet Shop, where Goldie says he's delighted to ahve swum in so much water but is glad to be back in his safe little fishbowl. Penny comes by and tells Goldie that his owners have arrived to pick him up, and a thrilled Goldie asks the pets what they'll do the following day, prompting them all to faint. At that moment, Blythe returns to the Littlest Pet Shop, now able to speak comfortably with Josh. Josh then gets a call from the Biskit Twins asking where he is—he tells them he spent his break finding something for the chinchillas at the Littlest Pet Shop, and they immediately fire him. Coincidentally, Madison passes by and receives a job at the Largest Ever Pet Shop on the spot.