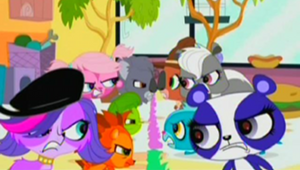 "They made everyone pick sides, and not like each other because of some feud or something, and we don't know how to make it stop!"
Story by Adam Beechen and Roger Eschbacher
Teleplay by Roger Eschbacher

In Blythe's room, Blythe discusses with Sue, Youngmee, and Jasper their plans to head to the amusement park as soon as it opens to beat the crowd, stating where they want to go and their goals. As Blythe gets ready to go to school, she looks at a T-shirt design with Vinnie and regrets that this design didn't work out too well.

Penny Ling attempts to greet Whiskers and Sideburns as they hop off their trees, but they are too busy glaring at each other to care, their growling scaring Penny away. The two of them then take out a stick of chalk and draw a line down the middle of the day camp room. Whiskers goes to the left and Sideburns to the right, declaring the other as their mortal enemies and recruiting the pets caught on their side—Russell, Vinnie, Minka, and Zoe for Whiskers and Penny, Pepper, and Sunil for Sideburns. The pets start laughing at their ridiculous behavior but quickly shut up when both koalas furiously assert themselves on the pets on their side and order the pets not to speak to pets on the other side.

At school, Blythe's class ends, and the students discuss their grades. Blythe's group more or less is proud of the results, but as they chat, the Biskit Twins walk by astonished at their own grades, Whittany particularly stupefied that she got an F while Brittany got a D-. Furious upon hearing Brittany boast about being "smarter" than her, Whittany tells her to be with "her own kind", forcing Brittany to join Blythe's group, and walks away on her own. Blythe, overhearing the whole thing but choosing to remain civil and polite, asks Brittany what happened. Brittany tells Blythe that, for the first time ever, Brittany got the higher grade so Whittany declares Brittany a "smart kid". When Blythe asks why this entails joining her social circle, Brittany tells Blythe that they consider Blythe's group as the class's smart kids, to the horror of the four of them.

At the Littlest Pet Shop, Russell goes over to Whiskers and Sideburns and tries to tell them that the place works on mutual respect and friendship. Whiskers, noticing that Russell has one foot on each side of the line, shoves him back over to his side mid-speech and orders Russell to be quiet, accusing Sideburns of being a criminal who must be stopped, along with his allies. Vinnie expresses delight at Sideburns's supposed past but is quickly shot down by Whiskers, forcing him in line. Meanwhile, Sideburns tells the pets on his side that Whiskers is a liar and schemer and encourages them to fight Whiskers and his allies. When Sunil states that he doesn't like those traits, Sideburns comes down and makes him his watch captain. Whiskers, figuring he needs a watch captain too, chooses Vinnie as his watch captain.

Blythe, at school, has spent her entire time with Brittany enduring her non-stop talking. Brittany initially talks about how Whittany has mistreated her but soon starts making insulting assumptions about Blythe and other smart kids. Brittany then follows Blythe into the cafeteria, where she complains that, as a smart kid, she may be required to read and study. As they head to their table, they pass by Whittany, who now sits alone at her own table, depressed. As they head to the table, Brittany starts relentlessly criticizing their clothing choices as she puts her feet on the table, spilling some of the food. Brittany follows Blythe into chemistry class, where she recknessly mixes things together while ranting about having to follow directions. Her concoction explodes in Jasper's face and crawls away as Blythe notices Whittany, again alone in the back, sighing to herself. Blythe, Youngmee, and Sue retreat to the library, where they seem to have lost Brittany. However, Jasper comes in with bad news: Not only did Brittany follow him and found out they're in the library, Jasper spilled the beans about visiting the amusement park. Sue braces herself with the misfortune of having to spend the day there with Brittany.

At the Littlest Pet Shop, Vinnie and Sunil watch each other closely as watch captains while Russell and Pepper engage in a staring contest. Afterwards, the two groups sit down in a circle on each half of the room. Penny tells Sideburns that she'd rather things returned to how they were like before the koalas got there, but Sideburns tells her that the other side wants her to think that and that Whiskers's group is trying to make them cave in and give up, which successfully provokes Penny into aggression. On the other side, Zoe laments that all of her belongings are on the other side. Whiskers tells Zoe that Sideburns's group withheld Zoe's things on purpose to weaken their fortitude. His words convince Zoe to detest the Sideburns camp.

Before long, the pets are all throwing food at each other. Vinnie and Sunil soon realize they're fighting for no real reason, and Sunil considers finding Blythe to figure out how to resolve the conflict. They then collapse onto the floor panting heavilty with everyone else watching. Blythe walks into the room and slumps onto the armchair. Although initially reluctant to help out, she does hear out Vinnie and Sunil, who talk about Whiskers and Sideburns. She sees the koalas continue to glare at each other, as well as the dividing line down the room, and figures that the best way to resolve a feud is to find the reason behind it all. Realizing that this is the solution to Blythe's own dilemma, she comes up with a plan to get Brittany back with Whittany by using one common fact: they both can't stand her.

At Downtown City Park, Blythe sends a text message to both Biskit Twins to meet Blythe. Soon, they see Whittany and Brittany approaching the restrooms. Blythe walks out to meet the twins and stalls, tapping her foot as a signal for Sue to slide a skateboard over. Blythe gets on the skateboard and starts rolling around uncontrollably on it, which elicits a giggle from Brittany. Watching closely from the bushes, Jasper brings out a remote-controlled truck with a ramp and positions it in front of Blythe to send her flying into the air, which causes Whittany to giggle. Finally, Youngmee, hidden from sight, pushes the trash dumpsters so Blythe lands in them, which causes both twins to laugh. Brittany and Whittany share apologies remembering that they have more common ground with each other than with Blythe and walk away.

Sunil and Vinnie directly ask the koalas to apologize, and unlike with the twins, they don't give in. Zoe accuses them of not even remembering what started the feud, which gets them both thinking hard. Whiskers asks if it may be a dispute regarding koalas as not really bears, but Sideburns says they resolved that one quickly by looking it up online. Sideburns believes it's because he wanted to try varying their diets beyond eucalyptus leaves with Whiskers refusing, but Whiskers recalls them trying out pasta and getting sick. Whiskers wonders if it could be because Sideburns wanted to watch telenovelas

whereas Whiskers wanted to watch luchador wrestling, but they figured out a schedule. After so much thinking and friendly discussion between the two, they decide to make peace and hug. With the day having reached its end, Mr. Coyfield and Mr. McHat drop by to pick up their koalas, the two of them now buddies. The friendship doesn't last long, however, as each owner tries to gesture to the other to go on out first, which escalates back to them being enemies as they exit simultaneously.

At the amusement park, Jasper notices Brittany advancing towards the gang. Initially apprehensive, Whittany emerges from behind Brittany and are now acting like their normal selves, having arrived to make fun of Blythe and leave. Blythe and her friends are relieved that life is back to normal.