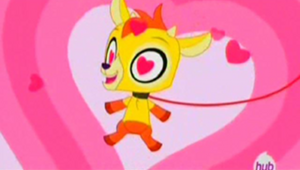 "They say there's a mysterious pet out there who goes around spreading love, like some kid of pet Cupid!"
Written by Guy Toubes

As Blythe and Youngmee make their way to the school, Blythe panics and bumps into Youngmee almost causing Youngmee to drop her tray of cupcakes. Blythe yanks Youngmee into a nearby bush and the two hide in it, Blythe showing to Youngmee that Blythe's crush Josh Sharp is chatting with friends in front of the entrance. When Youngmee asks why Blythe has to hide, Blythe explains that she gets so flustered when Josh speaks to her that she can only emit a goofy laugh before he walks away and finds it so embarrassing that she has chosen to avoid Josh whenever possible. As the two get up and attempt to walk around Josh, Blythe slips on a mud puddle and slides out into the open with the cupcakes falling on her. When she removes frosting off her face, Blythe sees Josh and, sure enough, laughs the embarrassing laugh she described earlier.

At the Littlest Pet Shop, the pets, especially Penny Ling, marvel out the window at the animal couples traveling by. She asks Russell if he likes feeling the love in the air as much as she does, but Russell finds it nauseating and prefers watching Space Operas instead, with Sunil walking by and telling Penny that he prefers slapstick comedies. Penny responds back saying that he'll eventually learn how amazing it feels to fall in love, but Russell scoffs back at her.

Right afterwards, Russell spots a goat chewing up a curtain in the day camp room. He introduces himself as Baa Baa Lou, and, having overheard the conversation, he tells Russell that he used to be just as disdainful of love but fell madly in love with a sow passing by when out for a walk in the park with his owner. Penny assumes it must be the work of the Secret Cupet, an odd force in the park that induces love upon pets out for walks there. This only stirs further confusion in Russell.

In Blythe's room, Youngmee searches about the Internet for a way to relieve Blythe of her embarrassment over the cupcakes and Josh. She finds the technique of writing a letter and throwing it away to get the feelings out of one's chest. Blythe is initially reluctant, but when Youngmee starts writing it herself, she soon convinces Blythe to come down and actually write it.

At the day camp, Baa Baa Lou continues to flutter about the room in joy. Russell quickly grows annoyed, but Minka and Pepper find it amusing. After Baa Baa Lou, as part of his dance, picks up and tosses Russell across the room, however, Russell reaches his limits. He puts on a deerstalker cap and vows to find and stop the Secret Cupet. Vinnie and Sunil admit they find Baa Baa Lou tiresome too and join Russell, with Penny third to volunteer in hopes of meeting the Secret Cupet. With the four of them, Russell discusses his plan: Russell and Penny will go to the park undercover as potential mates to lure the Secret Cupet to the area, upon which Vinnie and Sunil would then capture him or her.

Blythe finishes writing her letter to Josh that she intends to throw away, and Youngmee leaves to bake replacement cupcakes. Just as Blythe is about to throw away the letter, Russell, Penny, Vinnie, and Sunil drop by via the dumbwaiter and pressure her into taking them for a walk in the park. The five of them head out the door in a hurry, and Blythe quickly tosses the paper in the envelope into the wastebasket but misses, the letter landing on the floor. Roger spots it, takes a look at it, and decides to drop it in the mailbox himself.

At the park, Russell dons a handlebar mustache in addition to the cap, and Penny wears cats-eye glasses and a beehive wig, with Vinnie and Sunil holding nets. They invent excuses for Blythe, who drops them off at a particular location and stands back to watch. Russell and Penny separate, then walk back towards each other pretending to be in need of a romantic partner. After a bit of loud talk, Russell hears singing and ukelele coming out of a bush and follows it to find Sugar Sprinkles. Sugar Sprinkles subsequently targets her love-music at Russell and sends him back out of the bush, where he sees Penny and falls deeply in love with her. Sugar Sprinkles emerges out of hiding and is ambushed by Vinnie and Sunil, though she escapes, causing Vinnie and Sunil to capture Russell in their nets by mistake. The two of them attempt to get Russell to give chase, but he instead talks sweet nothings to Penny, floating around her with hearts coming out of his head.

Sitting on a bench, Blythe hears from Youngmee over the phone that Josh is headed towards the park. Sure enough, Blythe spots Josh skating by, and she makes a run back to the Littlest Pet Shop, grabbing the pets and ending the visit immediately. Roger comes back in too and tells Blythe that he's gone ahead to drop her letter off, causing Blythe to run back outside to pursue the letter. She brings Minka along to search for a red envelope, but Minka retrieves a green one instead. When Blythe calls her out on it, Minka explains that she's red-green color blind.

Russell continues to devote his attention entirely to Penny, which causes Penny to feel uneasy. She repeatedly tries to get Russell to leave her alone, but he is oblivious to all of her pleas and continues to advance upon her. Penny finally dashes far away from Russell, but Russell interprets the behavior as playing hard to get and follows her.

Blythe swaps Minka out for Zoe and tasks her simply with chasing the mailman down, with Blythe finding the letter herself. Initially reluctant to do such a cliché thing, she gives it a try anyway, barking madly at the mailman. Undeterred, the mailman pulls out a squeaky dog toy and throws it across the street. Zoe chases after the toy instead, distracting her long enough for the mailman to continue walking down the street.

The pets have had enough of seeing Penny run for her life as Russell relentlessly stalks her around the room, and Vinnie and Sunil head back to the park to confront Sugar Sprinkles and demand she put a stop to her Secret Cupet activities. As they walk away, however, Sugar Sprinkles appears by the window and directs her love magic at Vinnie and Sunil, causing them to turn their attention towards Minka and Pepper respectively. The two of them make a run for it and hide behind the same toy chest as Penny. As they try to sneak away elsewhere, Russell pops out of the chest with maracas, with Vinnie and Sunil not long afterwards. The girls run screaming into the dumbwaiter, prompting Russell to come up with a plan, leading Vinnie and Sunil elsewhere.

When Penny, Minka, and Pepper emerge back out of the dumbwaiter, the lights dim, and a disco ball lowers from the ceiling. Russell, Vinnie, and Sunil emerge onscreen in disco tuxedos and attempt to seduce the girls. Instead, the girls have a huddle and agree to suddenly run out of the Littlest Pet Shop as quickly as they can. As they do so, they find the Sweet Delights food truck and beg for Sugar Sprinkles to undo her love magic. Sugar Sprinkles is initially reluctant, claiming that they've never experienced real love and that she doesn't know how to undo the spells. When the guys show up in their tuxedos and start bobbing their heads, however, she too is horrified and tries yelling at the guys to stop. This proves futile, so she tries singing her songs backwards. This time, the hearts return to the ukelele, and Russell, Vinnie, and Sunil return to normal. It also returns Russell to the level of crankiness he had while in the park, so Sugar Sprinkles threatens Russell with her ukelele to lighten up. Russell, however, runs out of the truck as fast as he can with Sugar Sprinkles hot on his tail and the remaining pets behind them.

The chase makes its way to the front of Josh's house, where the pets trip the mailman, causing him to spill his letters. Blythe grabs her red envelope but finds herself at Josh's feet. Upon realizing him, Blythe panics and runs away. At that moment, Sugar Sprinkles tries singing to Josh, who becomes smitten at Blythe.

Back at the Littlest Pet Shop, Blythe and the pets watch Baa Baa Lou on a walk together with the sow. Blythe and the female pets talk about how they make a cute couple, which Russell admits he agrees with. He soon finds out Sugar Sprinkles is sitting next to him, and she pulls out her ukelele. Not wanting any more of the Secret Cupet business, he takes the ukelele and hides it, though Sugar Sprinkles simply pulls out a spare one.