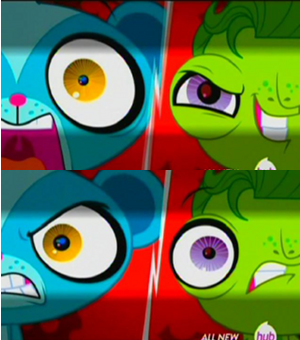 Mrs. Twombly hears over the phone that Sunil has fallen ill and can't come to the Littlest Pet Shop for the day. Zoe, wandering about the front of the store, overhears this conversation and rushes back to the day camp room to whisper the news in Pepper's ear. Pepper whispers into Russell's ears, Russell into Minka's, and Minka into Penny Ling's. By then, the phrase "Sunil is sick" has become "Cyril McFlip." Penny blurts it out loud, which Russell interprets as a new pet and stomps away, grumbling about how he's always the last to know.

Mrs. Twombly, still on the phone, finds out Sunil's owners need a sitter to come over to their house and watch Sunil. Blythe, who's walking by at the moment, gladly decides to help.

Zoe finds Russell, sulking elsewhere, and has to explain to him that Sunil is just sick. Russell feels relieved that no new pets are coming but soon remembers that the last time Vinnie was told Sunil wouldn't be coming, he destroyed the room in frustration. Just as the flashback ends, Vinnie arrives in the Littlest Pet Shop. Minka impulsively tells Vinnie that Sunil is sick and can't be at the shop, prompting everyone else to hide. It turns out to be a false alarm though, as Vinnie knows about Sunil's absence and walks off to watch TV.

At Sunil's owners' house, Blythe provides mango slices and a cold pack at Sunil's request. She tries to ask Sunil how he caught his cold, but Sunil goes into a tirade against Vinnie, blaming him for the cold. Because of that line of thinking, he now wishes to have nothing to do with Vinnie ever again. Blythe decides to figure out what happened to break their friendship.

Back at the Littlest Pet Shop, the other pets watch Vinnie dance happily about. Russell starts to feel worried that Vinnie might not be aware that Sunil isn't coming and that once Vinnie finds out, the day camp room will explode again. Zoe comes up with a group activity where everyone has to talk about his or her favorite thing about Sunil, and when it's Vinnie's turn, he instead throws a tantrum and walks offscreen. This prompts Russell to investigate the matter too.

Blythe returns to Sunil with another plate of mango slices. Blythe reminds Sunil that Vinnie likes mangos too, which causes him to choke. Blythe makes Sunil think of when he took a bubble bath with Vinnie, but this infuriates Sunil further, and he makes Blythe look for some finely chopped peanuts while Sunil slinks away.

Russell, meanwhile, finds his sleuth cap and takes up the name of Cyril McFlip. After failing to get any information directly from Vinnie, he takes Vinnie's suggestion of interrogation. Russell puts Vinnie on a chair and shines a lamp at his face but, once again, Vinnie refuses to talk. When Russell brings in a plate of mango slices, however, Vinnie tells his side of the story: Sunil requests him to dance, and after a few seconds, Sunil gets bored and loses attention. Vinnie attempts to dance harder, imagining himself in a concert hall, but winds up crashing into Sunil's table where he's attempting to practice a magic trick. This puts both of them on bad terms with each other. Hearing this, Russell figures Vinnie's behavior is not derived from Sunil's illness, though Vinnie says he isn't finished.

Blythe brings Sunil a large bowl of finely chopped peanuts and tells Sunil that his disease is worsening and that he may need to be quarantined for life. Sunil panics at the thought that he'll never see the other pets ever again and claims he's made a full recovery. Realizing that this means he'll have to see Vinnie again, Sunil decides to tell Blythe his side of the story: Sunil has been practicing a trick for weeks when Vinnie insists Sunil must watch his latest dance moves. When Sunil accepts, Vinnie continues to dance and dance and, seeing Sunil more interested in practicing his trick, leaps onto the table on purpose, destroying it and accusing Sunil of making his tap shoes vanish. Sunil tries to explain himself, but Vinnie has none of it and breaks his magic wand as revenge.

Russell feeds Vinnie his last mango slice, and Vinnie finishes the story: Vinnie gets so tired, he passes out, but he wakes up to find his tap shoes missing. Vinnie searches around the room, but before he asks Sunil, Vinnie fiddles with the magic wand and finds it broken. Sunil blames Vinnie for breaking his wand and ends his story there, going off to sulk in a clear plastic resting area. Vinnie overhears Penny and Zoe talking and hoping that Sunil won't stay away from LPS forever. Vinnie, worried about the possibility of never seeing Sunil again imagines a series of pseudo-romantic scenes with Sunil missing.

Sunil is apparently simultaneously imagining the same things from his perspective. He makes a confession to Blythe, and the two head back to the Littlest Pet Shop.

Russell, having scrutinized Sunil's stage, figures what actually happened: Sunil and Vinnie were practicing their performances independently, each mostly ignoring the other, when Vinnie falls by accident onto Sunil's table and takes a nap, unaware he lost his shoes in the crash. When returning to confront Sunil, Vinnie snatches Sunil's magic wand and bends it in frustration, breaking it. Russell shows that this is actually a gimmick wand that can bend at its midpoint as if it is broken, then reattach itself like new. The tap shoes were gone because Minka borrowed them without asking, remembering a promise Vinnie made to Minka many years ago.

Vinnie and Sunil, having found out that they needlessly blamed each other, make up and give each other a big hug. Mrs. Twombly comes in through the door to announce that Vinnie's owners have arrived to pick him up. Vinnie begins to exit the day camp, but not before running back to Sunil to give him one more hug for the day.