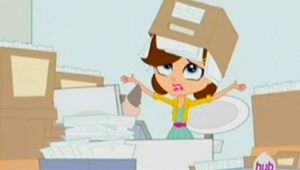 Mona: "I need my correspondence files from January, February, March, not April but yes, May. Type up two memos: One to proofreaders with three errors just to make sure they're paying attention, one to security telling them I don't like how I look on the security cameras. Pick up my dry cleaning at Fabio's, adjust the thermostat to my office to one fifth of one degree lower, and get a birthday present for my nephew Zebediah. He loves German toy cars from the 1950s. Now! Where are all my correspondence files!? Let's get on the stick, Blythe. We have a long day ahead of us!"

At the day camp, all of the pets, except Minka, call for Blythe's help all at once. To their amazement, Blythe promptly rushes into the room and solves all of their troubles with ease. At that moment, Mona Autumn's assistant Phoebe bursts into the room asking Blythe for help: Phoebe has been given a day off, but Blythe is the only person Mona trusts to substitute for her due to her prominence on Très Blasé magazine. In addition, Mona requests for Russell and Zoe to accompany Blythe to her building, as they're in need of Russell's and Zoe's help in modeling. After giving Blythe a list of rules to follow, Phoebe tells Blythe that she'll remain off the grid and thus impossible to contact the entire day, running out of the Littlest Pet Shop in joy.

The following day, Blythe heads to Mona's building and makes her way up the skyscraper. Along the way, she meets with Oliver St. Oliver and drops Russell and Zoe off with him. Oliver takes the two of them into a waiting room for pets and leaves, giving Zoe the opportunity to warn Russell that pets who have been in modeling for some time often grow competitive. A Spitz dog sitting on a high-up platform spots the two and hops down and introduces himself as Tangier and immediately recognizes Zoe, ignoring Russell. He gives Zoe his compliments, then lets Russell and Zoe know that he'll lend a hand if they need it. Russell takes Tangier's word, but Zoe has her doubts.

Blythe reaches the receptionist's office for Mona and meets up again with Cairo, Mona's pet sphinx cat. Cairo, having already known of Phoebe's day off, is excited to see Blythe again but feels worried that Blythe may not be up to the task. Mona hears Blythe's voice and yanks Blythe into her office, where Mona promptly saddles Blythe with a series of tasks. Flabbergasted at the workload, Blythe just stands there. Mona grows frustrated and shoves Blythe back into the receptionist's office.

Blythe quickly grows overwhelmed by the phone calls to Mona's office alone, and boxes of documents pile up around her. Mona asks Blythe to schedule an appointment with her hypno-aromatherapist, and while Blythe intially struggles to find such a service on the computer, Cairo picks up the hypno-aromatherapist's business card and gives it to Blythe. Blythe, meanwhile, laments her exhaustion and her inability to shadow Mona to learn her techniques. Mona walks over once again and asks Blythe to make an order for Mona's lunch, a quinoa salad without asparagus.

Russell, Zoe, and Tangier, dressed up in aviation costumes, ready themselves for the shoot, but Tangier expresses concerns about if Russell's outfit may be too small and that he once knew a pet model whose outfit tore and ruined his career. Sure enough, when Oliver comes in to guide the pets to the set, Oliver discovers a large hole in Russell's back that his quills have ripped through. Tangier heads to the clothing rack and shows Oliver a spare set of clothes for Russell. Zoe, however, thinks Tangier's behavior is too quick and convenient.

Blythe returns to the office carrying Mona's lunch, but Cairo points out Blythe is three minutes late. Blythe hands a sickly-looking Mona her salad, and she ravenously munches it down. Mona tells Blythe to get the place ready for Clover Fields, a reclusive designer coming in after lunch. Mona warns Blythe that Clover is eccentric and that conditions must be perfect, or else Clover will run away scared—at Blythe's inquiry, this includes having no assistants in the room whatsoever.

Now at the set, the three pets stand on the wing of a mdoel biplane for the shoot. Tangier tucks Russell's scarf for him, pointing out that Oliver likes his pets' clothes as neat as possible. When it comes time to shoot, however, Russell goes into a sneezing fit, rendering Oliver unable to take a good photograph. He leaves in frustration, but not before threatening Russell with banishment from the pet photography circuit if he messes up again. With Oliver and Tangier gone, Zoe examines Russell's scarf and winds up sneezing too. She detects sneezing powder on Russell's scarf and suspects Russell's aviator outfit was already torn when given to him. Russell attempts to go fight Tangier, but Zoe talks him out of it, looking at the camera Oliver left on a chair and getting an idea.

Having finally finished everything Blythe could find with Mona's tasks, Clover enters the receptionist's office. Clover compliments the orderliness of the room and requests to see Mona but hears a loud scream from her. Blythe runs into the office to find Mona's face is swollen, bumpy, and red, and that this is an allergic reaction to asparagus. Fearful that this incident will destroy her career, Mona slips into a panic. Blythe tries to assuage her, promising to make the meeting work, and goes back to talk to Clover, telling her to wait a moment more. At that moment, Cairo signals to Blythe and leads her to a compartment in the desk with supplies in case Mona eats asparagus. Blythe grabs them and goes back to Mona's office with a plan that begins with holding a menu to her face.

Tangier goes to the feeding bowls with a bottle of hot sauce and dumps the entire bottle's contents into Russell's food. Russell walks by as Tangier empties the bottle, causing him to quickly throw it offscreen. Russell and Zoe exchange words of cooperation with Tangier before looking back at each other in agreement.

Finally ready, Blythe escorts Clover into Mona's office. Clover immediately notices how dark it is in the office—the lights have been turned off and the window blinds closed—but Blythe brushes it off as Mona conserving electricity. Clover sees Mona, but Mona's face is obscured by the menu. Blythe claims Mona is currently ordering lunch, takes Mona's orders, and takes the menu away simultaneously with moving the lamp on the desk to take its place. Clover's attempts to see Mona are stopped by Cairo, however, who leaps onto Clover's lap to stall her further.

Sure enough, Russell takes a bite of his food before being photographed, whose spiciness causes him to run around in pain. Just as Oliver bans Russell from his photo shoots, Zoe brings Oliver's camera to him and shows him some photographs of Tangier inserting hot sauce into Russell's food. Having learned the truth, Oliver puts Tangier to "time-out" in his carrier. After Russell thanks Zoe, she tells him that she was simply using her knowledge of cameras.

Having had enough of Mona's face being obscured, Clover moves the lamp herself, but Blythe opens the blinds to the window, making it too bright for Clover to see anything. Blythe swiftly puts a washcloth and a pair of sunglasses over Mona's face and closes the blinds again, this time stating that Mona is sensitive to sunlight. Clover then asks why Mona has stopped talking, and Blythe readies the answer that Mona prefers to listen during her first meetings to get a feel for her guests. Clover, a bit confused, says that this sounds unusual but that she has been called unusual before and is pleased to meet someone else who's unusual. Blythe tells Clover that this means Très Blasé magazine should be the only one to feature her and her new clothing line because it's the only one that can understand her. Elated, Clover agrees to Mona's deal. She shakes Mona's hand so vigorously that the sheet and sunglasses fall off, but Cairo leaps over to personally continue concealing Mona's face until Blythe opens the door for Clover to leave. Cairo leaps away, revealing Mona is already healing. Mona offers her compliments to Blythe for keeping the meeting together, having demonstrated quick thinking on her feet. However, Mona also points out that Blythe is not fast enough to keep up with Mona's daily schedules.

At the end of the day, Blythe rejoins with Russell and Zoe. When asked how their day went, Russell says that it didn't end well for everybody: Oliver, reviewing the photographs of Tangier with the hot sauce, chastises Tangier for not giving total commitment to his job. Cranky, Tangier eats some food in front of him but soon realizes it's Russell's spiced-up food and is soon running around the room in fiery agony.