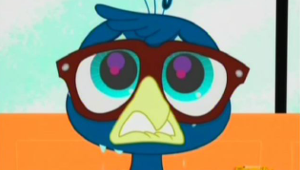 "The entire city's been talking about this guy's big plumage presentation! It's all over the news, billboards, skywriting..."
Written by FM DeMarco

With Blythe lying on the armchair in the day camp studying algebra, Pepper walks on by, rummages through her chest of comedy props, and when trying to tell a joke, pulls out the wrong one, leaving everybody confused. Blythe advises Pepper to keep her chest organized as Pepper slams the bicycle horn she pulled out in frustration. At that moment, Mrs. Twombly steps into the room to introduce Blythe and the pets to the day's guest, a peacock named Basil who will showcase himself at Downtown City Botanical Gardens. The other pets instantly get nervous, with Russell and Zoe thinking Basil will be a big-shot egotist, whereas Vinnie sees Basil as a hostile robot who relentlessly chases him down with his laser. Blythe attempts to get him out of hiding, but Vinnie just runs away again when Basil appears at the door.

As Basil walks into the room, he hits himself with the pet door and causes himself to fall to the ground. Putting his thick eyeglasses back on, he immediately asks if the building has been inspected for mold, to which Minka asks in disbelief if it's actually him. Basil confirms his identity and then asks about a breeze coming in through the window, which makes Minka even more confused. As Basil rubs his wings with hand sanitizer and talks about germs with Russell, Blythe interrupts Russell to assure Basil that the pets will make sure he feels welcome, then heads up via the dumbwaiter to study algebra with Youngmee.

As Blythe reaches her room, she finds Youngmee excitedly waiting for her there. Blythe asks Youngmee if she's ready to study, but Youngmee would rather discuss how to help the world with Blythe's ability to talk to animals despite Blythe's insistence otherwise.

In the day camp, the other pets marvel at how Basil has sorted all of the small objects in the day camp into their own compartments within another chest, with Russell walking over to take a look. With Russell and Sunil giving him their compliments, Basil tells them he wants to start a business organizing closets and that it's his passion. Penny Ling segues the conversation to Basil's upcoming performance, which gives him a panic attack and causes him to itch all over and demand antihistamines. Sunil figures that thinking about going onstage gives him hives, so Minka tests it out, confirms Sunil's assertion, and leaves, annoying Sunil. As Basil recovers, he explains that he's incredibly worried about having to display his plumage as he has never been able to lift his train the way other peacocks can. Pepper tries to get him to calm down by saying that it's not nearly as hard as he might think and that people have kept quiet, but Vinnie rolls in the TV and presents to Basil his marketing and how much hype he's accumulated. By the time Pepper yells at him to shut him up, Basil has retreated inside one of the benches, hyperventilating, and exclaims that he's never coming out.

Back in Blythe's room, Youngmee suggests to Blythe to launch a program called Barks on Tape, which would help explain canine sounds to laypeople. Youngmee then goes into a fantasy sequence where she and Blythe host an infomercial pitching Barks on Tape as audio CD sets. In response, Blythe tells Youngmee that her idea is good but that there would be problems manufacturing that many discs, that each type of pet would need its own content, and that CDs have fallen out of popular use. With Youngmee convinced Barks on Tape was a bad idea, Blythe attempts to get back to studying algebra, but Youngmee stops Blythe and says Barks on Tape was only her first idea.

Worried that Basil will stay holed up for the rest of his life, Pepper decides that the pets must find a way to get him out and ready to perform. Although she doesn't have any ideas in particular, she figures that no one can be so hopeless as to be beyond help and that she'd be qualified to try to work up some courage as she's performed for audiences before. Upon that, however, Basil notices a spider in his hiding spot and starts panicking.

Youngmee pitches her next idea to Blythe: Animal-assisted weather forecasting, playing on urban legends of animals being able to sense weather patterns better than humans. To that end, she then imagines Blythe as a weather reporter getting tips from various animals about meterorological events present and future, where a bird tells Blythe of snow the following day and Sunil warns Blythe of an oncoming storm. Again, Blythe tells Youngmee that it's a good idea but that such an undertaking would be too expensive. Youngmee realizes Blythe is right, but when Blythe suggests, once again, to start studying, Youngmee yanks the textbook from Blythe's hands and readies for her next idea.

Penny's attempt to coerce Basil to come out with a bottle of mentholated ointment fails with Basil staying quiet, so Zoe pulls out a throat lozenge claiming that peacocks love them. Zoe turns out to be right, with Basil instantly appearing in front of her. Pepper takes this opportunity to shut the compartment and guard it from him, then tells him that the maladies that appear when thinking about performing are all psychosomatic. She then turns to the other pets for help, and while initially reluctant, Zoe is the first one up. Zoe asks for a demonstration of how Basil struts, and when he tries walking down a red carpet, he trips on a squeaky toy and stumbles, making a mess of himself and wrapping himself in yarn. Zoe tries taking off his glasses, with Pepper creating a scent trail for Basil to follow. Basil soon finds out he's allergic to Pepper's scent and sneezes, causing him to stumble and crash into furniture, again tying himself to some yarn. With Pepper back to the drawing board and Vinnie packing and screaming, the two find the other pets having caught Basil trying to get back in the bench compartment and attempting to pull him back out.

Having talked Blythe into hearing her out again, Youngmee provides her third pitch: Finding animal witnesses for crimes that would have otherwise had no witnesses. Youngmee then imagines herself and Blythe as investigators, with Blythe finding a snail who saw an incident, hearing what it has to say, and deducing what happened. This time, Blythe believes it's a good idea, and an excited Youngmee scrambles back home to build upon her plan.

Without much time left, Pepper engages Basil in more rigorous training. Although slow, Basil is gradually able to lift up more and more of his train until he can do so for every feather, but in doing so, he also kicks up dust, causing him to sneeze and injure himself offscreen. With Pepper ready to give up, Blythe heads down the dumbwaiter to see how Pepper's been doing. Pepper admits that she's utterly failed to instill confidence in Basil but shows Blythe her newly organized prop chest. Looking at the prop chest, Blythe suggests to Pepper to provide him an object that will help overcome his mental blocks, but soon receives a text from Youngmee with a list of local unsolved crimes and has to leave. Taking Blythe's words to heart, she searches the day camp for something and finds a polka-dotted bow tie underneath the armchair's cushion. Grabbing it, she calls Basil over and tells him of an object that's endowed its owners of amazing skill and talent. Although initially skeptical once he sees it's a bow tie, he still displays great interest in it with Pepper listing a series of celebrity pets who have achieved fame with it, including pulling out a photograph of Old Bananas wearing the bow tie. Basil, being a fan of Old Bananas during his younger years, is convinced that the bow tie works and enthusiastically wears it around his neck.

At Downtown City Botanical Gardens, a large crowd of people have gathered to watch Basil. Backstage, Basil tells the other pets how much confidence he has and that nothing can stop him, and he emerges to the crowd's cheering and hollering. As he walks to the center, however, the bow tie gets snagged to a potted rose bush, untying itself, unbeknownst to Basil until it comes time for him to adjust it, only to realize it isn't there. Without the bow tie, he starts breaking out in hives, so Pepper releases a sweet smell Basil's way to bring him over to the rose bush where she's hiding. There, she tells Basil that the bow tie had no magic powers and that it fell off him some time before he noticed. She then tells him to tap into that confidence organizing things, gives his glasses back, and sets him back. Thinking about what had happened, he walks back, and this time, he effortlessly raises his plumage for the crowd and for audiences watching on TV.

With Basil's performance a success, Blythe gets back to studying. Youngmee bursts into her room wearing a trenchcoat and says that it's necessary to solve cold cases. Blythe, however, says that she likes the idea, and appreciates Youngmee's effort in finding ways to help people, but would rather make the most of her youth when she still has it. Youngmee considers that a good idea and asks Blythe if she'd like to study algebra with her. As Youngmee takes the panda hat in Blythe's room and puts it on her head, Blythe is reminded of Kora's suggestion to think of pets while designing for people and gets the idea of a "Pet Fest," an event designed to strengthen the bond of people and their pets, though Blythe decides it should at least wait until they're done studying. Nevertheless, Youngmee pulls out and gives to Blythe another list of unsolved crimes, which they both get a laugh out of—except that an awfully concerned snail is peering into the room.