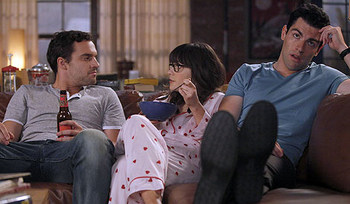 "These two best friends decide to move in together, what happens next will shock you!
(Or not, considering all roommate fics end up the same anyhow.)"
— Summary of Cohabitation (And Other Disastrous Ideas)

While this is of course Truth in Television, like Just Friends the situation is fraught with all kinds of potential drama for writers to exploit. Maybe one of them is secretly in love with the other, or maybe they both are. Maybe for some unlikely reason they have to pretend to be in a relationship in front of other people. Or maybe—just maybe—they really are just flatmates.

This is more common with Magical Girlfriends because they tend not to have anywhere else to stay and Unwanted Harems because Pretty Freeloaders make for easier contact.