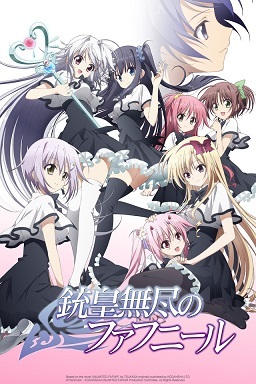 Twenty-five years ago, the world suddenly changed when monsters called “Dragons” appeared; seeking to ravage the earth and find mates. Over time, superhuman girls possessing the powers of the dragons, called “D girls” were born. Yuu Mononobe is the only male “D” in existence and is forced to enroll at Midgar - an academy for D girls. At the academy, he accidentally runs into Iris, a delinquent D girl, and even reunites with this long lost sister, Mitsuki. Will Iris and Yuu be able to challenge the seven dragons that threaten to destroy the world?

Unlimited Fafnir (銃皇無尽のファフニール, Jūō Mujin no Fafunīru) is a light novel series written by Tsukasa with illustrations by Riko Korie, and is published under the Kodansha Ranobe Bunko imprint. It spawned a total of 15 volumes, and ran from July 2013 to November 2017. It received an anime adaptation which aired as part of the Winter 2015 Anime lineup. Crunchyroll is streaming the anime, which can be viewed here

Crunchyroll has also licensed the manga, which can be read here

It should be noted however that events in the anime differ from the novel as Honoka is outed as Kili much earlier in the novels than in the anime.