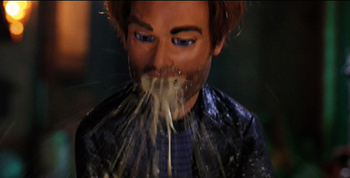 An Overly Long Gag to make you gag.

Random Patron: Hey, aren’t you that actor in that broadway show? Oh, yeah, it IS you! Sing that part where everybody gets AIDS!
Gary: [very subdued] I don’t act anymore. I gave that up.
RandomPatron: Oh, come on, man. Just a scene.
Gary: [snaps] I SAID GET AWAY FROM ME!
Random Patron: [Walks away]