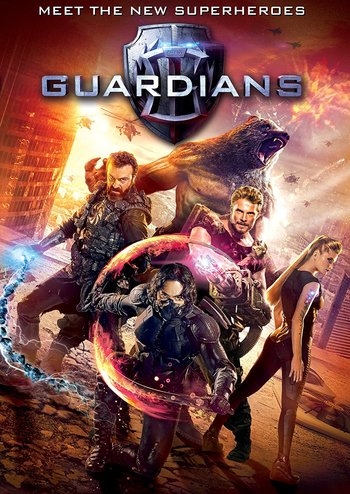 Major Larina: Let me get this straight. I have two weeks to search the entire soviet world to assemble a team of superhumans. A team to stop a supervillain.
General Dolgov: This team you must assemble... is our only hope.
Major Larina: [smug] Perfect.
Advertisement:

Russia is threatened by a villain named August Kuratov, who possesses a device that allows him to take control over any equipment he can see. The army is helpless against him, since he uses the device to turn Russian tanks, gunships, and walkers against them and is marching on Moscow with his army of clones, in order to take it over, followed by the rest of the world.

In response, a secret government organization called Patriot seeks out four superhumans, created during the Cold War, to stop Kuratov. The group of four represents some of the nationalities of the former Soviet Union. Ursus is a man capable of turning into a human/bear hybrid, the team's Heavy, using his claws and teeth to rip enemy soldiers apart and capable of wielding a heavy chaingun. Khan has Super Speed, mastery of various martial arts, and is a Knife Nut. Ler is an earth elemental, able to control the very rock around him, from forming gloves of stone with which to punch enemies to shifting mountains. Xenia is extremely flexible, can turn invisible, isn't affected by extreme temperatures, can spend long periods of time without air. Patriot provides Ler, Khan, and Xenia with special gear that enhances their existing abilities, while Ursus gets the largest gatling gun they have.

Not to confused with Marvel’s superhero film Guardians of the Galaxy or the animated fantasy film Rise of the Guardians.