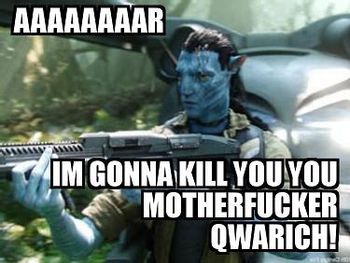 You tell him, Jak.
One day on Earth, Kernal Miles Qwaritch (HE'S NOT DEAD OK! PRETEND NETYRI DIDN'T KILL HIM OK!) was sitting in his house in Nevada, watchin lesbian flicks an drinkin Rollin Rok an eatin popcorn when all of a sudden his phone rung.
— The opening
Advertisement:

Avatars II: When Qwaritch Takes Revenge is a fanfic brought to us by "hunterjeanmidna". Acting as a "sequel" to the James Cameron film, the story stars "Kernal" Miles "Qwaritch", the villainous Colonel Badass we all know and love (or hate), and opens with him watching porn in his house in Nevada when he gets a distress call. According to "the dude on the other end", the "NAVIS ARE KILLIN EVERYBODY!". So "Qwarutch" "wants revenge cuz the Navis blew up his spaceship an speared him in his robot" so he gets in his little spaceship and takes off for Pandora while listening to Guns N' Roses. "Qwarich" then gets to Pandora and fights the Navis and....well, there's not really much of a plot to speak of.

However, there's action, action, more action, horses "yelling" as they "explode all over the jungle, appearances by "Master Cheef" (who here is a robot) and "Samus Arin" (who is male), and at the end there's a brief foursome with "Neytri".

However, that wasn't the end of the madness. He released a sequel titled The Navis Strike Back that features the Navis fighting to take back Pandora. Not only do they succeed, they also manage to kill Kernal Qwaritch. The end? Well...no.

Hunterjeanmidna then made a "final" part split up into three "books" that reveals that Qwaritch has a fully-grown Avatar on Earth for his soul to be transferred to in the event of death. He then plans to take advantage of his new Navi body and go back to Pandora, infiltrate the Navis, and then kill them. However, Qwaritch "goes through a real interestin plot twist so hold on to your popcorn"...

"hunterjeanmidna" has admitted that this and all his other stories were spoofs of actual horrible fanfiction, and isn't too proud of them.

The story used to be split up into 5 parts, but the author deleted the individual entries and put them all together in a "special edition"

that includes a new beginning and ending, works in Parker "Selfrige" and Grace Augustine, and adds a list of the characters (with bios, useful if you didn't know that Master Chief is "A robot guy like RoboCop") and pictures from the movie.