Characters of the science fiction webcomic Terra. Much of the information comes from the Codex cast page

As the war between the UEC and Asurian Empire dragged on, the unaligned races were caught in the middle. Many were driven off their homeworlds by human colonial expansion, and the refugees became easy targets for Space Pirates and criminal syndicates. Soon they began to fight back, and in 2260 four different species formed the Resistance, a formidable threat to the warring Human and Azatoth governments. Their goal is clear: to end the conflict that has caused so much suffering in the galaxy, and institute an intergalactic council that represents all species equally. Since it was instated, this organization has expanded in both size and strength, providing relief to vulnerable colonists and the liberation of internment camps throughout the galaxy. However, they do their best to keep under the radar of the Human and Azatoth military, as they cannot compete against their firepower. They operate a number of Agents who assassinate those who profit off the suffering of the innocent.
Advertisement:
The Main Cast 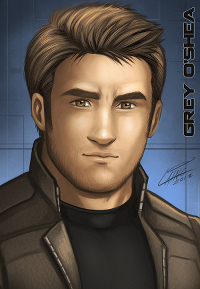 Grey O'Shea is an infiltration specialist, and captain of the Evening Star. He was born on Earth (Dublin, Ireland) but spent his late teen years on a mining colony stationed on Mercury. As soon as he hit his 18th birthday he enlisted in the UEC Mobile Infantry, and in only a year he possessed the skills necessary to specialize as a sniper. After several years, a tragic turn of events cost the lives of Grey's entire unit, with him being the sole survivor. Now with the Resistance, he trains under Agrippa Varus on the tactics and combat skills of a Resistance Agent.

The son of Consul Argo Varus, who served as the Empire's ambassador to other worlds, Agrippa was raised to treat other species with more compassion than the rest of his species. An exceptionally skilled combatant and leader, he joined the Asurian military at an early age and eventually reached the rank of Paladin. Unfortunately his father was later outed as a founding member of the Resistance and he and his family were ordered executed for treason. Agrippa escaped with a high-ranking Resistance operative, Eve Arlia. Agrippa joined the Resistance and has since become their top Agent and Eve's personal assassin and bodyguard. And lover. 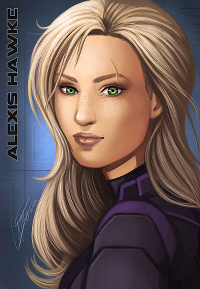 Formerly a slave serving under the Shadow Cabal, Alexis Hawke was forced to rebuild her life at a young age. At 19, she managed to secure her place in the UEC officer entry program, and qualified to become a deep space fighter pilot. She then spent the next several years stationed on the UEC space station Terra, patrolling nearby Earth based colonies for alien threats as part of the Jolly Roger Squadron. After being stranded on a distant alien world alongside Flight Engineer Rick MacFarlane, Alexis faces a new challenge as she confronts a life she had been fleeing from for years. 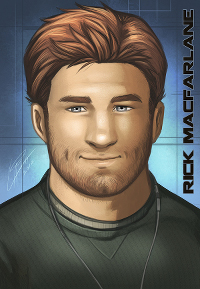 Rick MacFarlane was raised on Earth in a military family. At 16, he learned that his father, a sergeant in the United Earth Coalition, had been killed in action. The pension that they received was pitiful, and Rick was forced to take a job as a vehicle technician at a local garage to help keep his family afloat. It was during that time that he met his future wife, Rachel. After a few years Rachel discovered she was pregnant; desperate to give his family a better life, he enlisted as an officer in the UEC. At age 23, Rick was offered a position as a Flight Engineer. 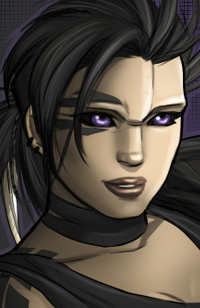 The younger sister of Agrippa's old friend Talos, she had a promising future until Sovereign Northazul ordered the Antares family purged. Talos got Rei to safety and ended up raising her by himself for most of her life. As their story picks up Talos is trying to hand her off to the Resistance to keep her safe as the Shadow Cabal closes in, but both groups are ambushed by Shadow Cabal mercs and Talos is killed.

Eve was raised to turn a blind eye to the plight of the worlds threatened by the human/Azatoth war. As she grew older she rejected this upbringing and left Varel to seek out like-minded individuals in the varied resistance movements across the galaxy, including Consul Argos Varus. With them she helped formalize the Resistance, an organization determined to take down the corrupt factions, and lead the galaxy to a unified future. When Sovereign Northazul ordered Varus and his family executed for his treason, Eve rescued his son Agrippa. 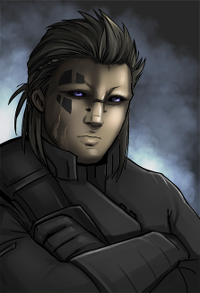 An old friend of Agrippa and a scion of a very wealthy and traditional Azatoth family, he joined the military when he came of age. When he returned home for a visit he found to his horror that Sovereign Northazul had ordered his family purged for perceived connections to the Resistance. Talos rescued his sister Rei and the two have been running ever since.

The Federation in theory and the world government of Earth. In practice, its politicians and military commanders are highly corrupt and more interested in their own well-being than that of their constituents. Even off-world colonies are starting to feel it, hence there being enough human members of the Resistance for General Cole Winters to insert The Mole. What at the outset of the First Contact War was seen as humanity's only hope is now a giant stumbling block to galactic peace.

Raised in a military family, Cole Winters knew he was destined to serve humanity at a young age. He enlisted in the United Earth Coalition as an infantry officer, and due to his high intellect and family influence, he rose through the ranks rapidly. He became renowned for his strategic planning, his tactics, while considered by many to be quite brutal, never failed to get the job done. Winters now serves as the Defence Representation for the UEC. Though he claims to have Earth’s interests at heart, his past actions make one question what his real motives are.

David Hayes was born on Earth but spent his formative years at a labour camp on a distant colony. This camp was owned (though not publicly) by weapons/tech manufacturer, Jacob Eden. David worked tirelessly for several years mining resources until one day an accident nearly claimed his life. Eden, while on a routine visit, was impressed by David’s determination to survive despite all odds stacked against him. He took it upon himself to help the young man, mending his wounds and installing biological implants to replace the body parts he had lost. Eden then used his connections with a nearby mercenary group, the Death Watch, to convince them to take David under their wing. After several years the mercenary group disbanded and David moved on to Bounty Hunting. Eden is his primary client, employing David to kill or capture anyone who gets in his way.

The Asurian Empire has ruled over the planet Asura and the Azatoth people for thousands of years. The Empire is led by the Sovereign, a figurehead who is elected and advised by a group of Consuls who control the different sections of Azatoth society (Art, Science, Military, Religion). The Consuls tend to be very closed-minded, rooted in the old way of thinking instead of moving toward a more progressive future. Despite the longevity of the Empire, the First Contact War has managed to shake the very foundation on which it stands, with clans taking differing stances on how the war should be fought. Many Azatoth think humans are nothing but a menace, and should be wiped from the galaxy, while others see them as potential allies and the war as a waste of a prosperous partnership.

Northazul Kalar comes from a lineage of political leaders. From birth he had been brought up to believe that the Azatoth were superior to all other sentient life. In the military, Northazul was a fierce tactician, winning countless wars against opposing species. In time, he gained the favour of the Azatoth elders and secured his position as Sovereign of Asura. Now, Northazul continues to cloud the judgement of the Azatoth public with his lies and fascist beliefs. He oversees the the Shadow Cabal, benefiting greatly from their extortion and enslavement of so-called “lesser” species.

Essentially the Evil Counterpart to the Resistance, the Shadow Cabal is a paramilitary group set up by Solus Kalar, son of Sovereign Northazul Kalar, to act as a personal army to his father. It is now a Nebulous Criminal Conspiracy controlled by Solus, with Northazul nervously keeping him on a short leash. The Cabal make their profits through the extortion of vulnerable colonies and the enslavement of the inhabitants. 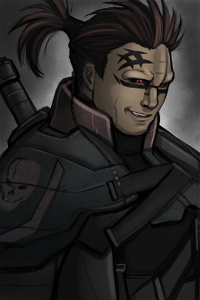 Solus is the only son of Asura's Sovereign Northazul, who had tutored him at a young age in combat, politics, and leadership. When he became eligible, he began his service in the Asurian military. In little time at all, Solus rose to the rank of Sentinel, commanding his troops with ruthless intensity, not sparing anyone who opposed the Azatoth. Over time, Solus became frustrated with the limitations of his position, and, using his father’s wealth and resources, decided to form his own private army, the Shadow Cabal.

Catella was the sole survivor of an attack by human raiders on a small Azatoth Colony (Chimera VII). She was only seventeen years of age, left ravaged, beaten and traumatized. After that event, she was forced into life in the outer colonies, picking up work as a mercenary. Over time, she became apathetic and hardened to the world around her, taking work that other mercenaries wouldn’t touch. Solus Kalar took notice of her efforts and offered her a position in the Shadow Cabal. Catella accepted, and has since stayed close to him, ready to carry out his will.

Kaleb Ceros is an extremely dangerous individual. He takes joy in the suffering of his victims, and wouldn’t hesitate to kill anyone who stood in his way. He met Solus during his service with the Asurian military. Kaleb was detained and charged for beating one of his subordinates to death. The order came in for his execution, but Solus, having authority, spared his life. He knew that Kaleb had the apathy he needed in an assassin who would carry out his will. Kaleb currently serves as Solus’s right hand man, responsible for taking out the Shadow Cabal’s most important targets.