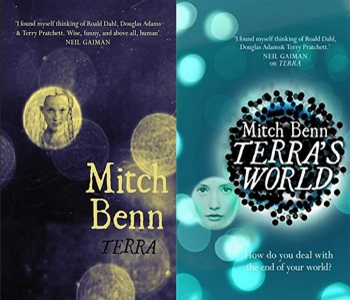 Terra is a science fiction novel by Mitch Benn, which tells the story of a young human girl growing up on the planet Fnrr, where she was taken when a Fnrrn scientist believed her (constantly arguing) parents had abandoned her. It was published in July 2013. The sequel, Terra's World, was published in July 2014. A third book, Terra's War was announced in 2019.
Advertisement:

Not to be confused with the webcomic of the same name (which is what the Trivia and Character pages refer to).