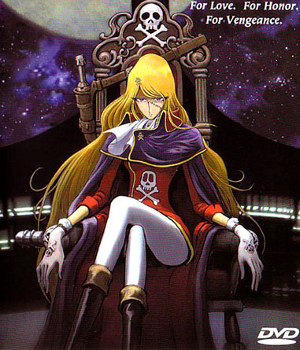 I am Emeraldas. The vast Sea of Stars is my home. Some call me "the woman who does not cry" — let them call me what they will, for theirs are merely the foolish words of those who have little understanding of the reason for my journey. Yes, I am Emeraldas. The woman who entrusts her very existence to the endless Sea of Stars through which she journeys.
Advertisement:

Queen Emeraldas (1998-99) is somewhat of an oddball of the Leijiverse — an OVA that, for the first time, placed the beautiful and deadly Space Pirate Emeraldas under the spotlight, after she had previously appeared as a side character in both Galaxy Express 999 and the assorted Captain Harlock media. It is a partial adaptation of Leiji Matsumoto's manga of the same title from 1978-79, but ties in with the 1998 Galaxy Express 999: Eternal Fantasy movie — in fact, these two were the first new entries in The 'Verse to be animated since the original Matsumoto boom folded in Japan around 1982. The OVA was also the first installment of The 'Verse to establish Emeraldas as the twin sister of GE999's Maetel.

Only the first two episodes out of four have ever been licensed outside of Japan. Their plot concerns Emeraldas' struggle against the Alfressians — a race of would-be galactic conquerors — and the misadventures of Hiroshi Umino, a young runaway from Earth who looks up to her for all the wrong reasons. The last two episodes, produced by a different studio, see Emeraldas and Hiroshi team up again to destroy a cyborg mass murderer and an old foe of Emeraldas come Back from the Dead, respectively. Emeraldas suspects a single guiding hand behind all of these incidents, but this never gets to be explored in the series proper.