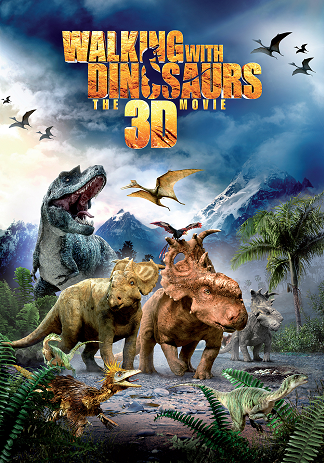 Walking With Dinosaurs 3D is a 2013 film based on the Walking with Dinosaurs franchise. Unlike the original BBC series, the film features anthropomorphized characters in a more conventional, family-friendly narrative.

The story revolves around Patchi (Justin Long), a runt Pachyrhinosaurus who tries to prove himself despite his small size. His best friends include his bullying brother Scowler (Skyler Stone), his crush Juniper (Tiya Sircar), and Alex (John Leguizamo), his best friend and companion Alexornis. The film follows the young trio of Pachyrhinosaurus to adulthood as they face tragedy, rivalries, and the threat of Gorgon the Gorgosaurus and his pack.

The film later received a re-release with the subtitle Prehistoric Planet, eschewing the voice cast in favor of a narration by Benedict Cumberbatch, bringing the film more in line with the main franchise.