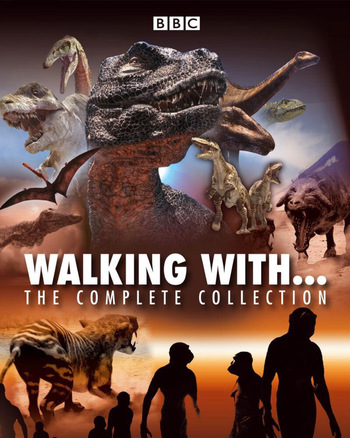 Monsters. Dinosaurs. Beasts. Us.
"And if all of this has taught us one thing, it's this: no species lasts forever..."
— Kenneth Branagh, narrator of the main entries of the franchise, at the conclusion of Beasts
Advertisement:

The Walking with Dinosaurs franchise is a series of Speculative Documentaries created by BBC. It employs state-of-the-art CGI and special effects to bring to life the prehistoric flora and fauna of a specific chapter in Earth's history.

open/close all folders
Main Series
These are the main entries in the franchise, with all but Cavemen being narrated by Kenneth Branagh.
Spin-Offs
Advertisement:
Tie-In Material

Prehistoric Park (2006) and Planet Dinosaur (2011) can be regarded either as spiritual successors to the later Nigel Marven specials and the original WWD, respectively, or as actual spin offs.