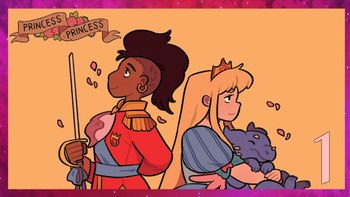 Amira (left) with Sadie (right)
Amira: But don't you want me to bust you out of that tower?
Sadie: Hah! As if you could. Dozens of princes already failed. What makes you any different?
Amira: Because I am no prince! My name is Princess Amira... and I have a grappling hook.
Sadie: Oh, sweet.
Advertisement:

is a finished webcomic by Strangelykatie

, starring, well, two princesses, who have differing ideals and approaches to life and go on adventures together.

Heroic princess Amira rescues Sadie, her fellow princess, who's been locked up in a tower. After Amira rescues a prince (Vladric, nicknamed "Butthead") the trio defeat an ogre and then must face Sadie's evil sister, who's the one that had locked her up.

In 2016, it was published as a short graphic novel, retitled Princess Princess Ever After, with an epilogue that isn't part of the webcomic.

Tropes appearing in this webcomic include: