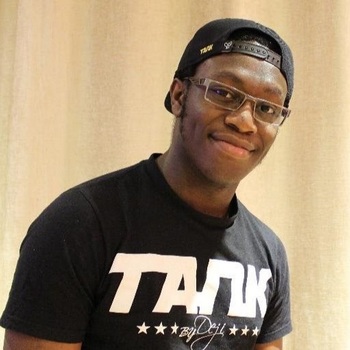 Deji began his career in 2012, two years after his brother and with great inspiration from him. Initially uploading a limited number of games, with some emphasis on Sketch Comedy, he now uploads various types of videos. Similar to his brother, he grew prominently due to his FIFA videos. Aside from LPs, he has a variety of other videos consisting of things like challenges and Q&As.

His main channel can be accessed here

, where he has over 10 million subcribers. He also has a second channel

Outside of YouTube videos, Deji works as a landlord and operates a clothing and merchandise line called Tank. He also worked on a graphic novel, Kung Fu Hero and the Forbidden City, which was released in November 2017.

Like his older brother, Deji has also gotten into music, although he's only released or featured on singles, as well as taken an interest in boxing. He made his boxing debut on 25 August 2018 when he fought Jake Paul in the last undercard match of the first "KSI vs. Logan Paul" event, and eventually lost by TKO after four-and-a-half rounds. He staged a return to boxing in the "YouTubers vs. TikTokers" event on 12 June 2021, where he fought Vinnie Hacker and lost via another TKO in the third round, which made him the only YouTuber of the event to lose their fight.

While several high-profile people in the YouTube community advised him to quit boxing outright, Deji announced that he would return to the sport after taking a break to focus on his physique, as he attributed his two losses to poor cardio.