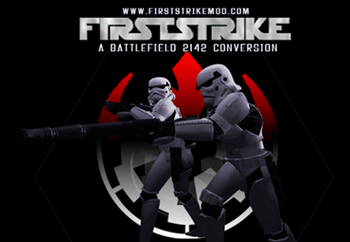 First Strike is a Star Wars mod for Battlefield 2142. It features the Rebel Alliance and Galactic Empire as playable factions and has battles set both on the ground and in space, the latter inspired heavily by the X-Wing series of starfighter simulator games.

The First Strike mod has examples of the following tropes: