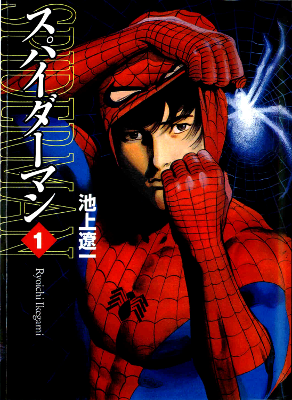 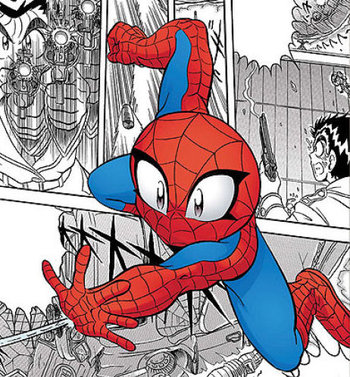 As an attempt to gain more fans in Japan, Marvel Comics tried to recreate various of their characters in one of the biggest markets on the world, and to do it, they give their rights to Japanese creators so they can translate their works onto Japanese Media. Although there were other intents like the Toku TV series as well the anime version of The Tomb of Dracula and the special anime intro for X-Men: The Animated Series, manga was the best way to start as one of the first (if not THE first) adaptations of Marvel's works was about the friendly neighborhood.

The second attempt is a bit more actual: Spider-Man J by Akira Yamanaka from November 2004 to May 2005, also published by Kodansha under the Comic Bom Bom magazine. In the year 200X, a supervillain who goes by the name Lord Gokibu wants to steal the fossil of the Insect King, 15 year-old Sho Amano uses his new spider powers to become Spider-Man J, to prevent this from happening. During his time as a superhero, he meets Japanese versions of Elektra, Doctor Doom, Blade, and the Fantastic Four. Different from the past intent, here there're even more liberties, being Sho Amano more a Spider-Man In Name Only and being a Short-Runner comparing with Ikegami's work, being reprinted by Marvel as part of Spider-Man Family.

Both versions haven't any relationship with the other, with the exception those 2 are based on the same myth than the source base (iconic costume included) and both are focused on Shōnen Demographic. Also, these works were translated and distributed by Marvel for Western audiences: Spider-Man was reprinted from December 1997 to April 1999 as its own title (as Spider-Man: The Manga) and Spider-Man J from April 2007 to November 2008 as part of the volume 2 of Spider-Man Family, a compilation of short stories of Spidey from various magazines. Also, both versions had being recognized as canon by Marvel, being part of the Spider-Verse crossover.