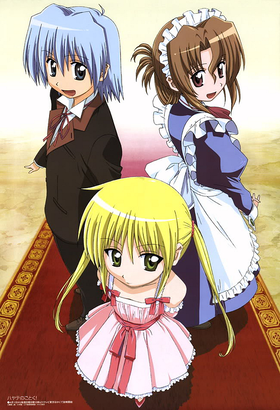 Screwball Action-Comedy at your service.
Hayate: When reading this Hayate the Combat Butler trope entry, make sure to read this from a decent distance away from the computer screen in a well-lit room.
Nagi: Got it?
"This is the super combat battle story of a boy who fights..."
Advertisement:

Sixteen-year-old Hayate is really down on his luck. Because his unemployed parents are good-for-nothings who waste what money they have on gambling, Hayate had to start working at a young age to help out his family.

Although such experience has made him inhumanly fast and tough (he can catch up with a bullet train on a bicycle and knock out a tiger with a single punch) and skilled at things boys aren't normally skilled at, it has also left him in an awkward position. His parents have racked up such a huge debt that they have sold Hayate to "nice men". In a desperate attempt to avoid this fate, Hayate decides to become a "bad guy" and kidnap someone to be held for ransom, but his efforts are mistaken by the girl he targets as a confession of love.

When he helps save the (as it turns out) ultra-wealthy 13-year-old Nagi from real kidnappers, she takes him in and gives him a job as her new personal butler (and love interest) until he can pay off his debt, which will take about 40 years. But Hayate is more attracted to Nagi's beautiful teenage maid Maria, and head butler Klaus is initially disapproving of the boy with such a poor look. And then there's Nagi's pet tiger, Tama, and Nagi's various social peers.

While it sounds like the setup for a gooey romantic comedy (and sometimes the series is just that), this manga drawn by Kenjiro Hata, which originally ran from 2004 to 2017 in Shonen Sunday, refuses to take anything in its universe the slightest bit seriously. Characters routinely reference the fictional nature of their existence, thinly-veiled parodies of characters from other series wander on and offscreen for no reason, and people do otherwise illogical things for the express purpose of "advancing the plot."

But then, there is a story arc in the manga as well; events that were originally just jokes have had their backstories explained; and there is a continual thread involving Hayate's past and the origins of his abilities, Nagi's mother, a Mineral MacGuffin, the Sanzenin and Tachibana family, a girl and a magical castle.

The first season of the anime, animated by Synergy SP, aired in 2007, and follows the manga up to a certain point, after which it adds a bunch of filler and creates plot holes for those who watched the season that followed.

A second season, animated by J.C. Staff, aired in 2009. It follows the manga more closely and has a much higher animation budget.

An animated film adaptation entitled Hayate no Gotoku! Heaven is a Place on Earth, produced by Manglobe (Samurai Champloo) and written by Yasuko Kobayashi (Shakugan no Shana), was released on August 27th, 2011.

The third season entitled Hayate no Gotoku: Can't Take My Eyes Off You! is an independent anime written by the author. It was aired as a part of the Fall 2012 season.

The fourth season entitled Hayate no Gotoku: Cuties, aired as a part of the Spring 2013 season.

The first season of the anime was licensed by Bandai Entertainment. Unfortunately, the creator and syndicators released the series subbed-only after it had released on TV, having already felt that the manga would not be a big hit and not expecting any further luck, and the company subsequently shut down in 2013. There is a dub made by Red Angel Media, although it is limited to Southeast Asian viewers. Some years after Bandai's closure, Sentai Filmworks stepped in and eventually released the entire series online and via home video (again, sub-only).

. Season 3 and 4 are also available on Crunchyroll

Season 3 can be viewed here

for people living in North America, South America, Europe, Middle East, and the South Pacific. Season 4 can be viewed legally there as well worldwide except Asia.

There is also a 2010 Live-Action TV Taiwanese Series of the same name, based on the original storyline but with differently named characters. Hayate and friends appear in the Massive Multiplayer Crossover game, Sunday VS Magazine: Shuuketsu! Choujou Daikessen.

Hayate the Combat Butler concluded in April 2017, with 568 chapters.

Here we have the character sheets of the sweet, wacky and lovable cast. (Well, except Hayate's parents. They're NOT lovable, and a different kind of wacky). Also check out the Shout Out page!- there are already a lot.

See also: Seiyu's Life!, which takes place in the same universe, is drawn by the same artist, and written by one of the series' voice actresses.

Not to be confused with Black Butler.