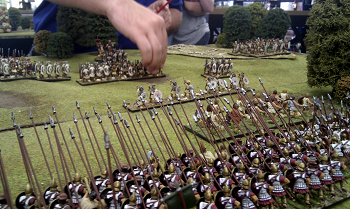 A genre of tabletop games centering around the simulation of warfare, based on either real conflicts or fantasy scenarios. There are two basic genres.

In 'miniature' games players use highly detailed miniatures, which fight over modelled terrain which could be compared to "low-res dioramas" of railway modellers. Because they are not static (often needing to be packed away at the end of the game) they lack the finer detail. However effort is made to accurately represent the terrain effects. Miniature games do not have a CRT like board games (see below); dice roll represent the "hits" taken by the target, either actual casualties, or something like morale loss. Movement is regulated by tape measures, with modifiers for terrain :- "Cavalry 20 cm, movement in woods counts x2"

Other games of this genre consist of one or more maps of the theatre of conflict, a variable number of unit counters (small square pieces of heavy cardstock with printed numbers and symbols representing military units, as well as markers of various sorts), and rules with accompanying tables and charts. The most important such table is a "Combat Results Table", giving a set of battle results calculated according to the numerical odds of attacker versus defender; the players roll dice and compare the resulting numbers to the table to see how the battle came out. Table wargames can focus on any level of battle from literally man-to-man combat (e.g., the Squad Leader series) to whole army groups or fleets. Expansion Packs with different scenarios are also common.

Board games confine players to the map terrain and supplied units, where as miniatures allow for fictional battles as you can rearrange terrain and units to your wish.

Pure internet publications would say board gaming was more popular in the US, where as Europeans were more likely to play miniatures. However the US has a healthy miniature scene, and the hex map business suffered contraction, but now appears to be growing again.

(1812), literally, "War Game," which was created by two Prussian officers, Lieutenant Georg Leopold von Reiswitz and his son Georg Heinrich Rudolf von Reiswitz. The game, intended to be a more modern realistic adaptation of Chess, was widely played by the Prussian officers of the 19th Century, and after some stunning Prussian victories, military officers around Europe. It was Serious Business from the very beginning; Kriegsspiel was endorsed by the General Staff of Prussia as an invaluable teaching aid. Kriegsspiel was the Trope Codifier for a lot of conventions used by current military thinkers, military historians, war gamers, and table top role players. It codified the use of the colors red and blue for enemy and friendly forces, respectively, the use of maps and miniaturised scale terrain, detailed movement rules and turns, referees and game masters, specialized dice, the block symbols for units, table quarters, Loads and Loads of Rules, the Random Number God, the core rulebook, Rule Zero, and so on. It was so influential that it is still available today.

A great many of the concepts used to create training simulations for modern officers and table top wargames today would seem completely familiar to the Reiswitzes, even despite technology they could never have imagined. The eminent author H.G. Wells was also responsible for several more light-hearted and simplified sets of rule conventions for wargame simulations —Floor Games (1911) and Little Wars (1913)— which were popular in Great Britain before World War I, and which had a strong influence on the later development of the wargaming hobby in the UK.

After World War II, the game evolved again. The original Kriegsspiel used only symbolic blocks to represent units. Little Wars advocated use of what were then standard 54mm or 3.5" toy soldiers. In the 1950s, with the rise of firms such as Hinchcliffe or Spencer-Smith who sold 25mm or 1:72 scale metal figures, new thinkers such as the hugely influential Donald Featherstone (who had commanded tanks in North Africa and Italy) advocated far larger battles over the same size table using figures 3/4 of the size. Featherstone's new rule-sets and advocacy of using smaller scales also coincided with the rise in cheap, small, plastic figures, and construction kits of tanks and artillery; like those made with injection moulding by the Airfix brand.

In the 1950's, Charles S. Roberts founded Avalon Hill and published Tactics II, which is generally agreed to be the first modern board wargame. Until the late 1960's, Avalon Hill pretty much had a monopoly in this niche, and its games introduced most of the mechanics and concepts still used today in board wargaming. The great majority of wargames use a map with a hexagonal grid overlay, for instance; Roberts got the concept from a high-level professional wargame simulating nuclear warfare.

During the 1970s and early 1980s, several companies (chief among them Avalon Hill, Simulations Publications Inc., and Game Designers' Workshop) produced literally hundreds of games covering every era of warfare from the ancient period to science fiction and Alternate History. In many ways a return to classical Kreigsspiel format, these games ranged in size from tiny "folio" games with perhaps 100 counters and maps no larger than a standard sheet of paper, to gigantic "monster" games with 9 or more 22" x 34" maps and thousands of counters. By the end of the 1970s, the biggest "monster" wargames (for instance, SPI's "Campaign for North Africa") were so complex and unwieldy that they were pretty much unplayable as actual games in the traditional table format. Also of note: Role-playing games, in their pencil-and-paper-and-rulebook format, first became popular in the late 1970s. There used to be some amount of tension between devotees of board wargaming and RPG players.

Since the early 1980s (and to a degree, before) the advent of home computers resulted in wargames mostly transitioning to the realm of electronics, since it was much easier to program the often-complex math required to accurately simulate many military events than to try to create tables and charts for table wargames. These games evolved into the genres we now call Turn-Based Strategy and, later still, Real-Time Strategy. Even so, there is still a hard core of dedicated map-and-counter-and-dice wargamers and companies to serve them, as well as numerous conventions large and small at which gamers can meet to play games and buy and sell them.

Since circa 2000, the board wargaming hobby has enjoyed something of a renaissance due, in part, to the revived popularity of tabletop games. Just as in the 1970's, games range in physical size from "folio" games (Decision Games has published several games that can use as few as 40 counters to represent all the units present at a given battle) to "monsters" with thousands of counters and numerous maps (e.g., Compass Games' Absolute Victory, a grand-strategic-level treatment of World War II intended as a revamping and expansion of the Australian Design Group's classic World in Flames, which covers not only the entire Western Hemisphere but even includes a map for Antarctica!). As of the late 2010's, Decision Games (which owns the SPI trademark and the copyrights to most of the classic SPI line), GMT Games, and Compass Games are the leading publishers in the hobby, augmented by smaller publishers such as Avalanche Press, MMP (Multi-Man Productions, co-founded by baseball Hall of Famer Curt Schilling in order to keep Advanced Squad Leader in print), OSG (Operational Studies Group, which specializes almost exclusively in Napoleonic-era games) and One Small Step Games. These companies both publish new designs and re-print classic 1970's and 1980's games; for instance, Avalanche Press has republished the 1974 Avalon Hill classic Third Reich and paired it with an original design, The Great Pacific War, covering the war in East Asia and the Pacific, which uses the same system as Third Reich and can be mated with the European game to present the entirety of World War II. GMT's own version of "Third Reich", "A World At War", is so popular that it has its own website.

Decision Games, which now owns the rights to publish SPI's legendary Strategy and Tactics magazine-with-game, publishes the magazine on a bimonthly basis, along with two other similar magazines with a more specific focus; World at War, specializing in World War II, and Modern War, focusing on contemporary and near-future conflict. Both of these magazines, like S&T, are available in magazine-only versions as well as versions with game supplements. GMT is known for the high quality of its games' physical components, and is the publisher of one of the most popular of all board games, Twilight Struggle, a two-player recreation of the Cold War. They're also the publishers of the highly popular COIN (Counterinsurgency) series, which covers insurgencies and rebellions throughout history from the Gallic Wars (Falling Sky) to Afghanistan (A Distant Plain). Compass Games has, in recent years, won praise for its reissues of classic games, which often are reworked by the original games' designers. Like Decision, both GMT ("C3i") and Compass ("Paper Wars") publish magazines with included games. The advent of inexpensive desktop publishing has also engendered a multitude of small publishers such as Hollandspiele, Revolution Games, Conflict Simulations Limited and High Flying Dice Games, which publish a wide range of games, often on subjects that might not be profitable for the major publishers to put out.

Proving that older ideas recycle, the Nottingham-based company Games Workshop began operations in the early 1980s selling fantasy and sci-fi wargaming from its dedicated shop outlets around the country. Despite computer games and map-and-counter-based games still having a foothold, and despite the dominant trend in the tabletop wargaming-with-figures hobby being historical gaming (Napoleonics and WW2 still dominate), GW carved out its own little empire, securing the alliegience and pocket-money of adolescent boys, who are the next generation of the hobby. In a time where traditional model and figure makers such as Airfix repeatedly went bust, GW have gone from strength to strength. And GW's other innovation stuck. "Traditional" wargaming with figures revolves around two scales: 20-25mm (1:76 to 1:72) or the older 1:35 (54mm), GW chose the intermediate 28mm (1:57 scale). This has proven very popular and has been taken up by many other figure manufacturers. The figures do not take up anything like as much table space as the comparatively huge 54mm's. They are also large enough to carry a lot of fine detail which a skilled artist can bring out. While 20 and 15 mm figures can provide an impressive spectacle en masse, the observer has often got to squint to make out individual detail. This is not an issue in 28mm.