The Hero's Journey
aka: Monomyth 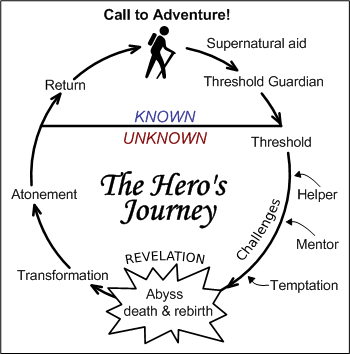 "Wallace, when my journey began, I was living in an ordinary world. Ramona skated through my dreams, and it was like a call to adventure, a call I considered refusing, but my mentor, that's you, told me if I want something bad enough, I have to fight for it! So I did, there were tests, allies, enemies. I approached a deep cave and went through a crazy ordeal, during which I totally seized the sword! Sadly I died, then I resurrected! Now I realize what I should've been fighting for all along, but before I do, I have to ask one final favor of you... could you put a robe on and hand me the phone?"
— Scott Pilgrim, Scott Pilgrim vs. The World (deleted scene)
Advertisement:

The pattern of the Hero's Journey can be found in shows ranging from Star Trek to Buffy the Vampire Slayer. George Lucas claims to have used it as a guide when writing Star Wars. Traditionally, the Hero's Journey was cyclic; a female Hero's Journey is more likely to be cyclic than a male's. Buffy The Vampire Slayer fits this to a tee; the movie is the first cycle, and each season roughly corresponds to one additional cycle. The game Journey intentionally fits this model exactly, even referring specific steps in the soundtrack's titles. This sequence is so ubiquitous that even The SpongeBob SquarePants Movie can be shown to follow it.

This approach is not without critics, however. Some critics argue that Campbell's theory has become a formula on how to make hit stories and thus discourages originality since it is unsuitable for every type of story. Others (most notably Greg Egan) feel that the pattern is too vague and general to be a notable pattern among both classical and modern stories. Still others feel that the approach focuses far too much on what good stories do when how they get there and the problems they must solve are more important. Even when looking at the theory as a description of what already exists, folklorists complain

that the pattern isn't really universal, because archetypes are culture-specific, and finding the Hero's Journey as a universal in stories from other cultures is only shoehorning them into familiar patterns.

The YouTuber Minewitcher2 explains this trope while reviewing the movie Rio and how the film mostly follows this path while also explaining how it took a important divergence from this trope.

The YouTuber Minewitcher2 explains this trope while reviewing the movie Rio and how the film mostly follows this path while also explaining how it took a important divergence from this trope.