Lighter and Softer
aka: Lighter And Fluffier 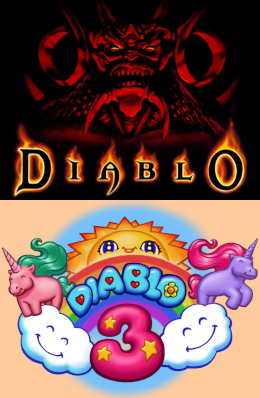 Fans feared this would happen, and this was Blizzard trolling them. Mostly.
Roger Meyers Jr.: So, we figured he could, y'know, just grab Itchy and toss him in a bucket of acid.
Marge: Oh dear.
Meyers: But then we remembered that this might be interpreted as violence which is "morally wrong" now, thanks to you. So, what's your big idea? How do we end this?
Marge: Hrmmm. Let's see. Oh! Couldn't Itchy share his pie with Scratchy? Then they would both have pie!
Meyers: It's different, I'll give you that.
— The Simpsons, "Itchy & Scratchy & Marge"
Advertisement:

Often found alongside Denser and Wackier, Younger and Hipper and Kinder and Cleaner. Also often signaled by an increase in wacky humor.

Just like with Darker and Edgier, please keep in mind that Tropes Are Tools. When something is lighter and softer than its initial source material, it doesn't mean it's automatically worse. It usually depends on who creates/writes said material as well as how subtly they make the transition. Executive Meddling may of course be at fault; "We gotta appeal to the kids!" But other reasons include trying to be more mainstream, to change an unpopular run, to appeal to another demographic, to recognize and dispel Too Bleak, Stopped Caring etc. The Lighter And Softer run can end up being positively remembered for years to come. It just depends on who's behind the product and how they execute it.

Contrast Darker and Edgier, Bloodier and Gorier, Cerebus Syndrome and Hotter and Sexier.