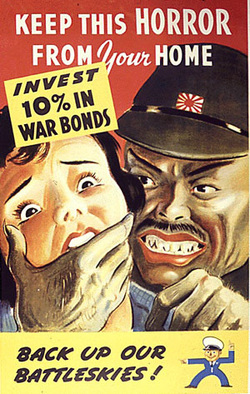 The slightly more subtle form of Appeal to Force, Appeal to Fear isn't a direct threat, but nevertheless is based on the idea that something terrible will happen unless you agree with a given position. The difference can be summarized like this:

This is a fallacy because whether an outcome is frightening has no relevance to whether the initial statement is true or not. Social order may collapse if you disagree that 2 + 2 = 5 (as in Nineteen Eighty Four), but that does not mean that 2 + 2 = 5. A type of Appeal to Consequences, where someone is supposed to be afraid of an outcome and therefore assume it to be true or false as a result. In marketing, this fallacy is known as FUD ("Fear, Uncertainty, and Doubt") and is applied to the use of vague criticisms of opposing products in order to try to persuade consumers to buy by brand.