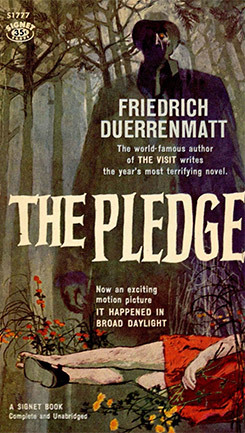 Das Versprechen: Requiem auf den Kriminalroman, better known as The Pledge: Requiem for the Detective Novel, is a crime thriller written by the Swiss author and playwright Friedrich Dürrenmatt in 1958. A very popular subject in language classes throughout the German-speaking world.

It was based on the script for the Swiss-German movie Es geschah am hellichten Tag (It Happened in Broad Daylight), a cautionary tale for the public about child predators and murderers, starring Heinz Rühmann as the inspector and Gert Fröbe as the killer. This screenplay was written by Dürrenmatt too, but he was unhappy with the Surprisingly Happy Ending, brought forth by Executive Meddling.

So he chose to write his own version of the story, quite a bit Darker and Edgier and more complex than the film and its fairly standard plot. Among other things, it makes both the protagonist and antagonist more tragic, and gives the whole spectacle a Bittersweet Ending, perhaps even a Downer Ending.

In return, Dürrenmatt's book was itself adapted to film four times. The 1996 version, The Cold Light Of Day starring Richard E. Grant, moved the setting to post-Soviet Czechoslovakia. The 2012 version, simply called The Pledge and directed by Sean Penn and starring Jack Nicholson, shifts the setting to rural Nevada.

Both later works follow Tag in their basic plot and premise:

Somewhere in Zurich, in the heart of the Swiss Alps, an old peddler named von Gunten makes a horrifying discovery; in a forest, a school-age girl had been cut to death with a razor blade.

From a local village, von Gunten calls his old acquaintance, Komissar Matthäi of the Canton Police, to come and investigate for himself.

The police investigator meets the murdered girl's parents, and promises them to find the killer, delivering the story's MacGuffin. Then he goes to the girl's school, and finds out from a classmate that she claimed a giant had been giving her chocolate hedgehogs. He finds a picture she drew before her death, featuring herself, the giant, a car and a Capricorn.

In the meantime, the locals have decided that von Gunten himself, previously convicted for sexual offence, is in fact the killer, and try to lynch him. To save him from the angry mob, Matthäi arrests von Gunten and hands him over to the local police. Equally convinced of his guilt, the police conduct a 20-hour non-stop Perp Sweating, and thus torture a confession out of him.

The case seems solved, especially when von Gunten, driven to despair by the interrogation, hangs himself in his cell. Matthäi gets commended for his work and even the victm's parents thank him for keeping his promise.

Matthäi himself is ordered by the confederation to travel to Amman, Jordan, to instruct the local police force. However, he gets severe doubts about von Gunten's guilt and his colleagues' apt and popularist judgement. Seeing how von Gunten is implicated with two further similar child murders throughout the country, the chances are high that there still is a serial killer on the loose.

Overtaken by guilt, he skips the flight to Jordan and quits his job as a police investigator, vowing to keep the promise he gave and track down the killer on his own. He buys a gas station in the alps, in direct vicinity of the crime scenes, and hires Frau Heller, a former Hooker with a Heart of Gold and her little daughter Annemarie. Having taken advice from local children fishing, Matthäi wants to use Annemarie as bait to catch the killer, who seems to be fixated on killing blondes in red skirts...

The films and the book provide examples of the following tropes: