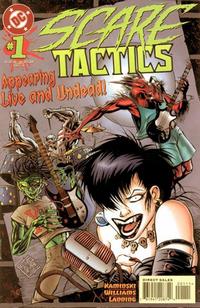 Scare Tactics is a comic book series published by DC Comics. A total of twelve issues appeared, dated from December 1996 to March 1998. The series, written by Len Kaminski, was a part of DC's Weirdoverse group of titles.

The series focused on the band Scare Tactics, which was a group of monstrous rock and roll musicians that encountered supernatural adventures while on the road.